From StrategyWiki, the video game walkthrough and strategy guide wiki
Jump to navigation Jump to search
Round the Bend | Table of Contents | Gameplay | Walkthrough 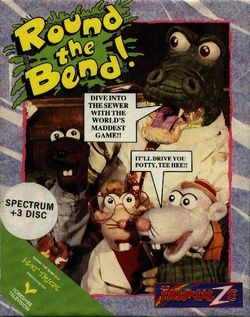 Round the Bend, full-titled as Round the Bend: Doc Croc's Outrageous Adventures, is a platform game that was released by Impulze upon the Sinclair ZX Spectrum, Commodore 64 and Commodore Amiga in 1991; it is based on the Hat Trick Productions and Yorkshire Television puppet series of the same name, which focused on a quartet of animals (in addition to Doc Croc himself, there were three rats named Lou Brush, Vince, and Jemima) producing a comic in the sewer. The game's story is that Doc Croc accidentally blew up Lou Brush's printing press scattering pages of the comic's latest issue all over the sewer - so Doc, Vince and Jemima now have to search the drains to find them, while Lou tries to reconstruct the printing press. When they find a page, he (or she, for the case of Jemima) will be drawn into a minigame, inside it; however, each character can only be drawn into the pages of the comic he (or she, in the case of Jemima) writes and only Lou can pick up pieces of the printing press.

The game is also virtually impossible to finish, due to poor level design, the characters not being able to jump high enough to get over certain enemies or platforms and having to fall into the water of their own accord (to be sent back to their office, which is what will happen to them whenever they get hit), and each character only being able to enter the pages of the comic that they write (all that's known is that Doc Croc wrote the "Nursery Spot") - and even if Lou should manage to collect a press piece, he will still drop it again (returning it to its original position) if he should get hit and sent back to the office.