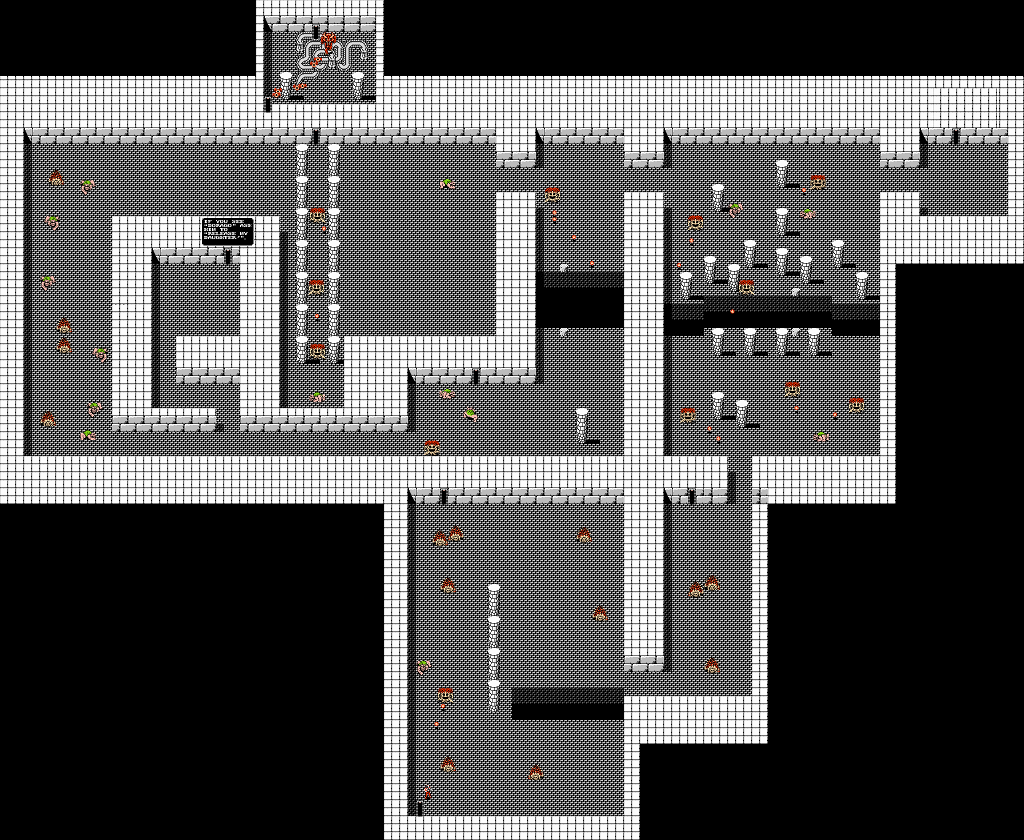 To reach Dorago's Palace, you must return to the island where Mt. Primevil is found, and head to the north coast. There, you will see a stump in the ground, and the palace just a short distance away. In order to reach the palace, you must use the Crossbow from the stump. Like the Wind Pulley, the Crossbow can be a little difficult to use from the overhead perspective, and is best tried when your upper body overlaps the stump. Dorago's Palace may seem large and expansive, but it's layout is actually not all that complex. Even without a map, you can't make too many wrong turns, so you'd eventually find your way to Dorago's chamber. The true challenge comes from the non-stop appearance of enemies at every turn.

The inside of Dorago's Palace is, ironically, very much like Garloz. Red Hyokings climb out of the ground and stampede to the south, while Red Kinobles move left and right firing orbs of energy at intruders. In this respect, you should be very familiar with how to deal with the enemies that you will face. There is one new enemy, however, and you should approach it with caution. The four legged Ghelmans are capable of running across the floor at quite a fast pace. They will change directions to face you and charge at you with surprising speed. They should always be your top targeting priority, as they can do quite a bit of damage to you if you don't deal with them quickly enough.

Dorago's palace is full of bottomless pits that you must avoid. From the entrance chamber, you must walk north a bit before you head east, or your way will be blocked by a large pit. Above the pit is the door to the next room. Follow it up to another room which has a large pit that stretches from one end of the room to the other. The only way across is to use your crossbow on the stumps found in the right side of the room. After you cross, head up and to the right to find a small room where you will meet a hermit who will heal you and give you a Life Potion provided you have already found the Coat of Arms. Having it at this point can make a huge difference.

From there, head left to another small chamber. If you follow the path to the left, you will end up in a large room from which there is no exit other than the way you came. Instead, head south in the small chamber, and use your Crossbow once again on the stumps to cross the chasm. Once on the other side, it's a short trip to Dorago's chamber with only one detour to a room with a hermit who begs you to rescue his daughter. It's a nice sentiment, but has no bearing on the game.

As you make your way to Dorago's chamber, you should prepare well for the fight. You will want to have a full set of hit points if at all possible, and at least 5 if not 7 Mind points. If you have at least 5 Mind points, you will be able to activate Attack & Assail, which is very useful against Dorago. If you have 7, you can cast Recover if you need it, but if you have a Life Potion, you're better off using the points for Attack & Assail. 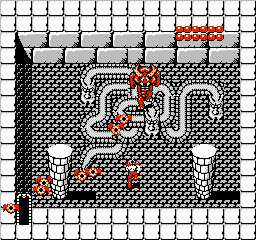 Avoid the deadly stream of insects.

Dorago is a very tough boss in comparison to all that you have faced so far. He's not particularly difficult to hit, but he fires a continuous stream of powerful insects at you, wherever you run in his room. It's difficult, if not impossible to hold still and get a lot of shots in on him before you end up getting pelted by insects, and these insects do a lot of damage at 3 hit points per hit. For this reason, the Attack & Assail ability is highly recommended. It allows you to attack and hit him no matter where you are standing for 10 shots, so that you can damage him while running for safety. If he is not defeated before the effect wears off, you will have to get close to him and hit him, but the Attack & Assail should have weakened him up considerably.

Note that you can jump over most projectiles; this includes the insects, so one possible strategy when you need to get in close is to stay below him, towards one or the other end of his side-to-side motion, and hit him now and then. When the insects get close, jump over them to the other side and try again. This back and forth motion will keep the insects having to reorient their position in relation to you, giving you the chance to get in a hit now and then. Eventually, he will take enough damage and be destroyed.

When that happens, a door will appear along the back wall, and inside you will find an Indora god. The god will give you the Indoras' Armor in return for rescuing him. Collecting the armor will instantly return you to Garloz. Indoras' Armor will slightly increase your defense, enabling you to withstand more damage than you could ordinarily. With all of these items in your possession, there is still one place left to visit. To get there, you must return to the Gran Mountains, and climb to the very top. Then run east along the peaks to find the Tower of Garba.