Eruga's Forest is a very long side scrolling section that shouldn't pose a major problem. You will need to use the Grappling Hook in order to pass all the way to the end, so it's pointless to come here if you don't yet have it. The same two enemies from the Valley of Rolsa are here; the Molgolins and the Olbis. They are accompanied by a new and extremely annoying enemy, the Kinatarnos.

The Kinatarnos are a worm-like enemy that shoots spikes at you from the back of its tail. The spikes must be jumped over. However, you can deal with the Kinatarnos in a sneaky way, by scrolling them slightly off the screen. When they disappear from sight, the game does not put them back on the screen unless you scroll far away and return. You should not do this with Kinatarnos that are considerably higher than you, as those can be dealt with easily, and will give you Tone and Last points.

There is a hermit who lives in this forest in secret at the top of the tallest tree in the forest. To reach it, you will literally have to go out on a limb. After climbing the first set of ropes to the screen above, you will see a branch to the left that can't be leaped to. Instead, you'll have to stand on the very edge of the branch beneath and fire the Grappling Hook up to it. Then jump over to the branch on the left and fire the Grappling Hook once again. It will catch on the branch in the screen above, and you can climb up the rope to a door, where the hermit inside will heal your wounds.

Back down closer to the water, you will only be able to progress so far when it appear that you run out of branches to leap to. It is at this time that you will need to fire your Grappling Hook upwards in order to find the branches above that will help you continue on your journey. You will find a door with a Hermit inside who tells you of Eruga, the monster for whom this forest is named.

After you climb back down, you have a relatively straight shot to the end where the boss is waiting. Scroll the Kinatarnos off the screen if they are too much of a threat. Before you face the boss, you should try to prepare by having full strength, seven Mind Points in case you need to cast Recover, and preferably five hit points. 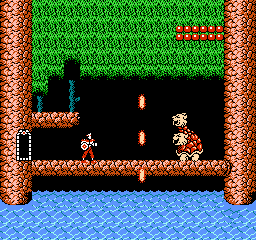 Dodge the pulses that Eruga fires at you.

Eruga is a two head monster who slowly lurches towards you across a branch. He will occasionally fire three pulses of energy into the air, which fan out as the travel along. The branch to the left is your key to avoiding harm from these pulses. Run up to Eruga and start flailing the diskarmor at him as fast as you possibly can. When the first of these pulses appear, try to jump over the middle one and return to attack him. Eventually, he will get closer, and you will have to use the branch to avoid getting hit. Jump on to the branch and let the middle pulse travel below you and the upper pulse travel above you. Keep dropping down when the coast is clear and continue to attack him. Repeat this process until he is destroyed. If he happens to get too far along on the left side, you can jump over him and attack him from the right side, but you will be more vulnerable to his attack since there isn't a branch to make use of on the right side.

When you defeat him, a door will appear on the right side, and inside you will find an Indora god. The god will give you the Wind Pulley in return for rescuing him. Collecting the Wind Pulley will instantly return you to Garloz. With the Wind Pulley in your possession, you can now cross the tether that connect the stumps on the mainland and the island in the south west corner of Garloz. Travel to the island in order to find the entrance to your next destination, Mt. Primevil