You control the player throughout the game. You mission is to become powerful enough to take on and defeat the mighty Ligar and restore peace to the world. The only way you will accomplish this mission is to visit various monks, and find the Indora gods who can bestow power upon you in the form of items. Most items will make it possible for you to visit new areas that were previously unreachable. Throughout the game, your only means of attack is the diskarmor. The diskarmor is a special weapon which you can swing forward to attack your enemies. As you defeat monsters, you will earn points that are applied to attributes known as "Tone" and "Last" (described below) which increase is offensive and defensive powers respectively. You can see your current stats, as well as review your items and cast spells, by consulting the subscreen (press

while playing the game). At the beginning of the game, you can sustain three hits with no healing before you die and the game is over. You can obtain vials of potion that will restore one hit point, or you can use the star power that you collect to cast the spell of Recovery if you have enough stars. If the game is over, you can press

to continue the game from the entrance of the area in which you died. 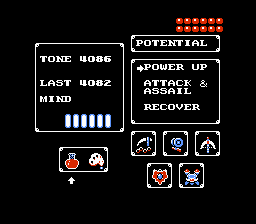 Note that the max possible value of Tone and Last is 4095. If defeating an enemy would cause either value to go over 4095, that value will not increase at all. Since 4000 Tone value already means highest attack, and 4000 Last value means max health, there is no negative effect.