The region known as Ragua Sando (shown above) serves as the entrance to Lapis. You must cross it first and climb up a tall tree to reach the aerial kingdom of Lapis. Almost identical to the first section of Mt. Primevil, it contains no surprises. Once again, you should focus the majority of your attack on the flying Epolcons instead of the low-lying ground enemies which you can jump over if you have to. Reach the right side and climb up the tree to find the entrance to Lapis.

Like Sagila's Cave, Lapis is spread out over a wide area of space. Unlike Sagila's Cave, there is absolutely no shortcuts; you'll have to explore it all. You'll need both the Grappling Hook and the Crossbow to make it all the way through. Shortly after you begin Lapis, you'll encounter more Garzel birds, and you'll need to fire your Grappling Hook up to a floating island above the farthest island on the right that you can run to. Climb up the line that you created to the island above.

Once you are up there, you will encounter a new and difficult enemy, the Heavy Soldier Bargan. They can cause quite a bit of damage if you don't know how to deal with them. They fly down from the sky, and they will remain wherever they land. Every so often, they will raise their arms and a large pulse of energy will fly forward. This pulse can't be ducked, it can only be jumped, or you can use your grappling hook to hang from the bottom of the ledge. Either way, prepare to escape this attack approximately one second after they raise their arms, and resume attacking as soon as you are able to. As long as you remember to jump or grapple, you will escape injury. Be sure to take them out slowly, one at a time. If you rush too far too fast, you could become pinned in by two of them, and you are sure to get hurt in that situation until one of them is defeated.

After you destroy the first Bargan, you will have to use your Crossbow to continue on in Lapis. Stand along side (or on top of) the stump that you see, and press

to fire your Crossbow. A line will appear from your stump to another stump across the way, and you can use the Wind Pulley to cross over. You'll need to do this a few times until it's time to use your Grappling Hook to descend to another platform below.

Use your Crossbow once again, and deal with the Garzel and Bargan that you find. Run to the end of that long island and grapple down below once again. As you climb down, two Garzels will already move in on you. You'll have to attack them quickly if you want to escape harm. After making it over to the very long island, you will have to tread very carefully; a large number of Bargans and Ammolums will begin to attack. If you move slowly enough, you will have enough time to deal with them all, but if you rush, you risk getting overwhelmed.

After the door at the end, you'll have to grapple down one more time. After you Wind Pulley to the next island, a single Ammolum will spawn every time you scroll the screen to the left. This is a good opportunity for you to stay put and earn Mind points if you need them to cast Recovery. You can scroll the left edge of the island off and on the screen, and cause the lone Ammolum to reappear. Keep attacking it until you earn enough Mind points to heal yourself before moving on. After that, only a few Garzels and Bargans stand in your way. 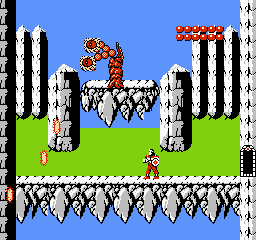 Climb up to attack him when he stops firing.

Belzar is a peculiar boss. He's not too difficult because he never moves, but he is situated in a very inconvenient location on the screen. You should definitely have the Power Up spell activated when you fight him. He has two heads, and they will each fire a pulse at you. At most, there can be four pulses on the screen. Stay on the ground until four have appeared. Then time the use of your Grappling Hook so that you can climb up to the right side of him without getting hit. Once you are up there, begin wailing on him with the diskarmor, but pay careful attention to the next time he fires pulses. If you stay focused, you should see them coming and be able to jump over them and continue your attack. Eventually, he will take enough damage and be destroyed.