Making to the entrance of Primevil Mountain is the hard part. Once you're inside, you have considerably less to worry about. Unlike on the overhead perspective, you will automatically use your Wind Pulley at the right time as you approach each stump. The trip to Sagila's Cave in the heart of the mountain is a straightforward one.

You will have to contend with a new enemy, the dragon-like Epolcon creatures. They carry stones with them and attempt to drop them on you. The higher they are, the less likely they are to time their attack properly. The lower flying ones are a bit more accurate. Fortunately, they also fly low enough for you to jump up and hit them. Since they are a greater threat to you than the ground enemies, you should prioritize attacking them. Try to take them out before they get close enough to drop stones on you. It is highly suggested to cast Attack and Assail and wipe the enemies at a single hit, but watch your remaining uses.

Sagila's Cave is quite large, and is designed to make you explore large regions of it needlessly. Other than the farthest door on the left side of the cave, which contains a hermit that will restore your strength, the remaining doors in the early section of the cave only contain hermits that provide information. The secret to properly proceeding through this cave is to remain on the top level and run all the way to the door on the right. When you do, you will find yourself back outside, in the familiar sunset view that this game is famous for (see the bottom of the page for a map of this region).

The unique enemies that you encounter in the cave aren't quite unique. They are just faster and stronger versions of enemies that you have frequently encountered up until now. The Sunyougi trilobites replace the Pragokelis turtles. The Ammolums replace the rolling Rolphers. And you will start to encounter the flying Garzels which move very much like the Molgolins. However, the biggest threat of all may be the fireballs which leap out from certain pits. They appear with regular timing, so learn their pattern before you advance. They are also vulnerable to your diskarmor - clearing them out with a few well-timed hits will open a window for you to safely jump across each pit.

Proceeding all the way to the end of the region will deposit you back in the cave, only you will enter through the door on the far right side of the cave. From here, you must run to the left, and use the Grappling Hook to climb your way progressively lower in the cave. You'll need to use it four times until you reach the level which contains the entrance to Sagila's den, at which point you must run to the right. Carefully hop to each cavern platform and time your jumps over the fireballs that fly out of the pits. 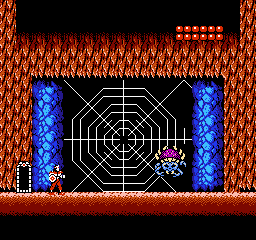 Don't let Sagila fall on top of you.

Sagila is a large spider-like monster. He has spun an impressive web, but it won't harm you in any way. Sagila attacks by colliding with you as he runs around the room, literally by climbing up the walls and across the ceiling. One of his favorite surprise tactics is to climb directly above you and drop down on you when you least expect it. Try to counter this by moving constantly, and running in the opposite direction so that you run beneath him as he falls to the floor. Every time Sagila is hit with the diskarmor, he will turn around and go in the opposite direction. If you happen to have cast Power Up, your diskarmor will be long enough to hit him twice before he can fully run away. If you attack frequently enough, you can hold him in place and he constantly changes direction with each hit. Eventually you will wear him out and he will be defeated.

A second strategy is to use your grappling hook in the middle of the room and climb to the ceiling. This will negate Sagila's ability to drop onto you. From this position, the spider will only come at you from the left and the right, which makes it an easy target for your diskarmor.

When the boss is defeated, a door will appear on the right side, and inside you will find an Indora god. The god will give you the Crossbow in return for rescuing him. Collecting the Crossbow will instantly return you to Garloz. With the Crossbow in your possession, you have a choice to make. You can either create your own tether to Dorago's Palace north of Mt. Primevil, or you can attempt to discover the secret of Lapis. Completing either one will make completing the other much easier. Heading to Lapis at this time will take a bit longer since it means a lot more running around Garloz, but it's just slightly easier to survive than the palace. It is also possible to visit Tower of Garba at this point, but you are unlikely to have enough Tone value to defeat even the first enemy.