With the Pegasus Flute from the Tower of Garba in your possession, you are now capable of breaching Ligar's headquarters, the Sky Castle. It can only be found from within the Valley of Rolsa, where you must use the Grappling Hook to climb to the very top of the highest tower in the valley, known as the Tower of Lile. As you ascend the tower, you will notice a few Molgolin's precariously perched in locations that make it very easy for you to get hit if you try to jump up and attack them. Instead, hold off and let them get closer to you while you attack continuously. They will be destroyed before they have a chance to hit you.

Once you reach the top, you will be able to see the palace. A hermit inside the door says you must meet the 5 Indoras to enter the castle. Since the fifth one gave you the Pegasus Flute, now is the time to use it. Stand on the ledge outside the door and use the flute. When you return to the game, a rope will lead to a door suspended in mid-air. Climb up the rope to enter the Sky Castle. 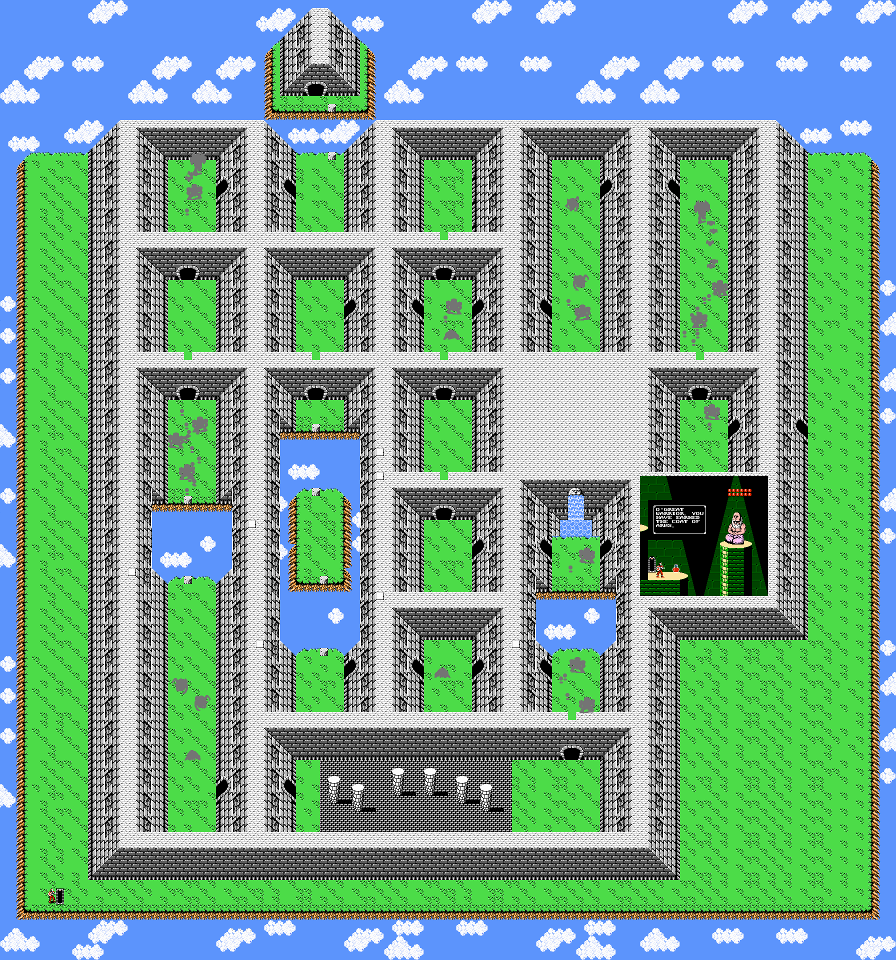 You will begin outside the palace in the gardens. You start in the lower left corner of the map. The only entrance to the interior of the palace can be found in the upper right corner, and you must run along the southern edge of the palace to reach it. Fortunately, there are no enemies to harm you on your way. The inside of the palace, however, is another story.

The palace grounds are populated by three types of creatures, collectively known as Shadow Beasts. Each beast behaves very much like a beast you have already encountered. The fast-moving Shadow Beast is very much like the Ghelmans from Dorago's Palace. Another Shadow Beast moves left and right firing projectiles at you. They are a lot like the Kinobles from Garloz, but they fire much more rapidly. Finally, the last Shadow Beast is a clone of Dorago himself. With your improved strength since the last time you fought Dorago, these shadow clones shouldn't pose as much of a threat, but they are still dangerous.

Your ultimate objective is to navigate the maze-like interior of the castle, and reach Ligar's chamber and defeat him. There are two sub objectives that you may wish to accomplish along the way. One objective, which is highly recommended, is to take the short detour in order to find the hermit which will heal your wounds and bestow a Life Potion upon you whenever you visit him. This room can serve as a great location for staging the second objective. That objective is to max out your stats. The highest your "Tone" and "Last" stats can get are 4096, although they will probably stop at some number just shy of that. All of the Shadow Beasts can help you reach this goal, but the Dorago clone in particular will help you reach it faster than any of the others. It's worth returning to the first clone's position, fighting him, leaving the room, and returning to fight again until you achieve your goal or get too low on health.

Whether you choose to do this or not, you will have to navigate through the chambers and use your Crossbow a few times before you reach the floating island upon which Ligar's chamber can be found. When you are ready, enter the chamber and challenge Ligar. 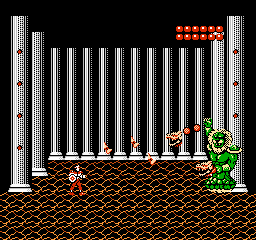 This is the final battle for the peace of Argus.

You may be surprised to find that Ligar, although large and powerful, is quite stationary like Belzar and Deathpigor. This may make the final battle a little anti-climactic, but you should not underestimate Ligar as he is still a challenging boss. He is only vulnerable in the head, and he holds two dragon heads which shoot projectiles at you at a consistent rate of fire to keep you at bay. Whether you choose to get up close, or utilize Attack & Assail, you'll have to keep your eye on your hit points, and use the Life Potion, or Recovery if you collected and have held on to 7 Mind points. If you maxed out your Tone stats, you should be able to defeat Ligar with 9 hits. When you do, you will restore peace to Argus, and you will be treated to the ending of the game. Congratulations.

If you finish Ligar with a hit from Attack & Assail, since the screen flashes each time you attack, the ending screen will keep the flashing light and look somewhat different.