It is possible to reach this location right after completing Mt. Primevil, however you are unlikely to have enough strength to defeat even the first enemy. The lowest suggestion is to come here after clearing Lapis.

To reach the Tower, you must return to the Gran Mountains. In order to do this, you must return to the door near the center of Garloz that you came through when you first arrived there. (Some might consider this cheating, but one very fast way to return to this door is to die anywhere in Garloz and continue. You will begin right at the door, but you will only have three hit points out of your current maximum, and no life points.) Once you're back in Gran Mountain, begin the climb up to the second level of screens, and run to the west side of the mountain.

Eventually, you will have to use your Grappling Hook to create a line to climb up in the alcoves where there are no ropes. If you do this enough, you will reach the very peak of Gran Mountain, where a hermit can be found who will heal your wounds and offer you a Life Potion if you have the Coat of Arms. Definitely collect this potion, as it will help you immensely in the tower. Then descend one level down, and begin running east. You will need to use your Crossbow to create tethers between the stumps and use your Wind Pulley to make it all the way to the east where you will find the entrance to the tower. 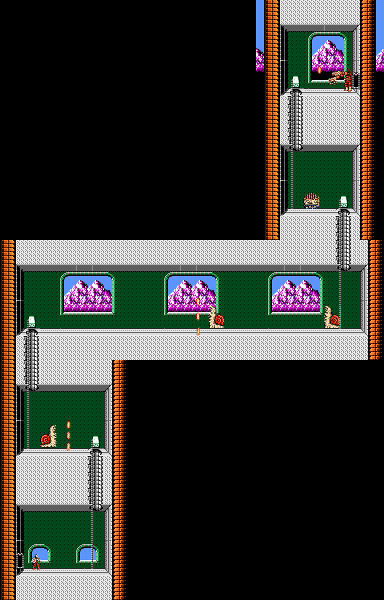 If the music that you hear gives you a sense of foreboding, it is very appropriate. This tower may be short, but it is quite deadly. There are a total of five enemies in the tower, all of which are boss-like in strength. You start off in the entrance chamber, and you can climb up a rope to the next floor.

When you arrive, you will see a hideous giant snail-like monster known as Kuzeelar. Despite its drastically different appearance, Kuzeelars fight exactly like Eruga, the first boss that you fought in order to gain the Wind Pulley. They will very slowly advance in the small chamber, and occasionally release a burst of three pulses which fan out. With just a small platform to jump on for safety, you'll have to be a bit more strategic about avoiding the pulses. Ultimately, you may wish to withstand the attack and continue to deliver your own. With much greater strength, you should be able to defeat a Kuzeelar in far less time than it took to defeat Eruga. They should not be able to get off more than one or two sets of pulses before you destroy them.

After you defeat the first one, a rope will appear for you to climb. Once you're on the next floor, run to the right and you will encounter the second Kuzeelar. Note that this Kuzeelar can respawn indefinitely, so that it is a good source of points, provided you can beat it within 4-7 hits. Immediately after that one comes the third and final Kuzeelar. When they are defeated, a rope to the next floor appears. Climb it, and you will find the single instance of an enemy known as Demoro Bruzer. Just as Kuzeelar was another representation of Eruga, the Demoro Bruzer is another representation of Sagila. It has the exact same attack pattern as that giant spider which guarded the Crossbow. The only difference is that the room is much smaller, so you're more likely to collide with Demoro Bruzer if you don't attack frequently enough.

Once Demoro Bruzer is defeated, another rope will appear. When you climb it, you will have reach the top, where you will find the boss of the tower, Deathpigor. 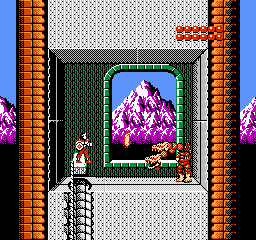 Just as the other two enemies in this tower were rerepresentations of bosses that you already faced, so too is Deathpigor. Deathpigor behaves exactly like Belzar, the boss of Lapis which guarded the Coat of Arms. Only Deathpigor is resting on the ground which actually makes him easier to reach than Belzar. In fact, Deathpigor may be one of the easiest enemies in the whole tower. By dodging the pulses that he fires, and wailing on him as quickly as possible, you can make short work of him in very little time.

When that happens, a door will appear to the right, and inside you will find an Indora god. The god will give you the Pegasus Flute in return for rescuing him. Collecting the flute will instantly return you to the tower entrance in the Gran Mountains. The god will inform you that you should play the flute at the top of "Lile Tower" which happens to be the name of the highest tower in the Valley of Rolsa. This is where you must return so that you can gain access to the final stage in the game, the Sky Castle.