From StrategyWiki, the video game walkthrough and strategy guide wiki
< S.T.A.L.K.E.R.: Shadow of Chernobyl
Jump to navigation Jump to search

The main HUD is typical of most first-person shooters. 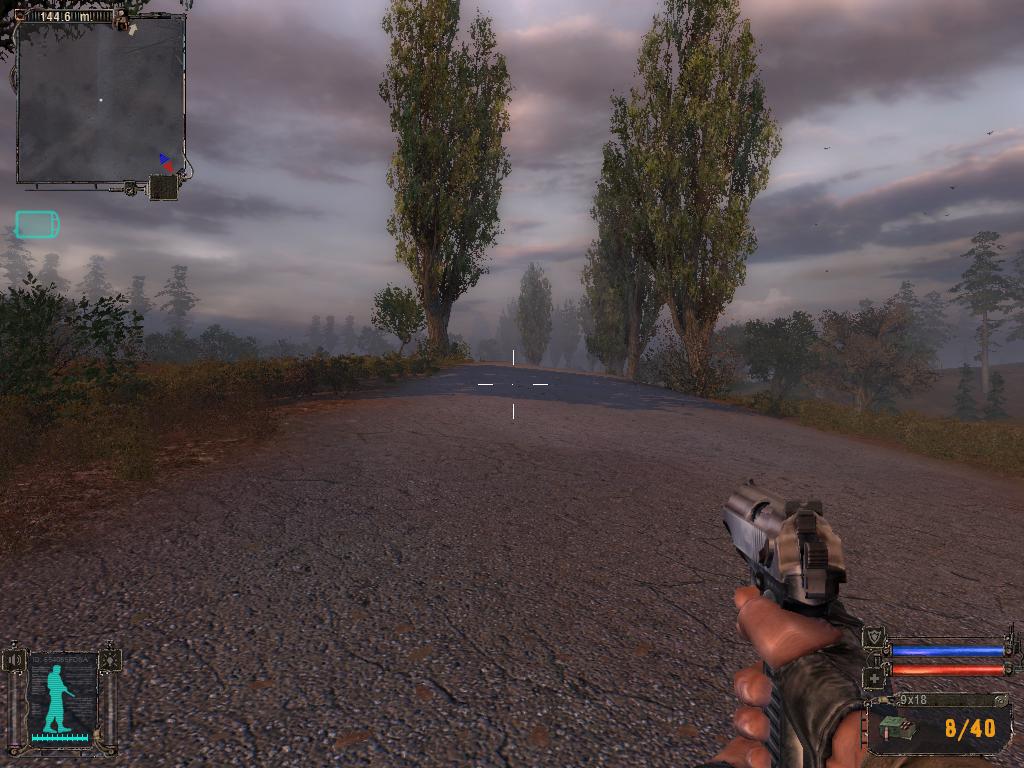 Top-left corner is the minimap, shoowing the compass, direction to the next objective, as well as the number of detected contacts (including their corpses, if they fall). There's also a blinking PDA icon if you have new information to review on the PDA.

The bottom left corner shows the Stalker's stance, and stamina. There is also two stealth meters beside this, showing sound and visual profile (which raise as you either make noise or appear visible to hostiles.)

The bottom-right corner shows the armor condition (in blue), current health (in red), and ammunition count. 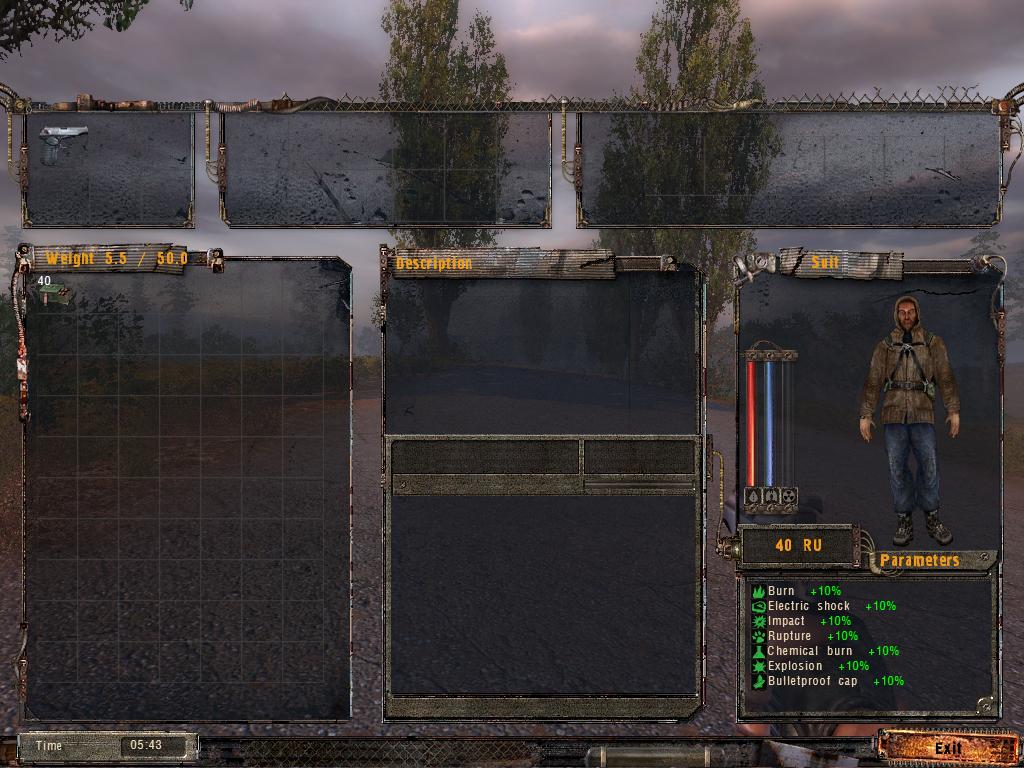 You will also be looking at your inventory frequently. The top of this screen shows your equipped items - the pistol at the top-left, a primary weapon in the middle, and up to five artifacts in the top-right belt.

The left window is the list of carried items, and it also shows the weight limit. You can right-click on some items for additional options, such as detaching an item, unloading ammo stored in the weapon, or dropping them to the ground. The weight limit shows how much you can carry, and exceeding the limit will significantly increase stamina cost to move. Exceeding the limit by 10 units will prevent you from moving.

The center of the screen shows basic information about the selected item.

The bottom-right window shows character status, showing the health, mental health and radiation meters. Damage reduction for various damage types are also shown. Of these meters, the blue bar representing mental health will be affected only when being hit by one specific type of enemy that appears in the game (and, when depleted, your character will die no matter of regular health level), otherwise it will be full at all times.

The video tab allows basic changes to how the game is rendered. Within these options, you can set the quality settings as high as desired, such as setting to maximum. Any resolution is supported, although interface elements will get squashed if below 1024x768. Brightness settings can also be changed here.

The advanced tab provides finder control over details. Of these video advanced settings, only one advanced option is of concern. Either Sun Shadows (in the advanced tab) should be disabled, or the console variable r2_sun_near_border should be set to 1.

Sound sliders for regular sound and music may be set, along with an option for EAX.

The controls tab allows adjusting mouse sensitivity, along with rebinding controls as desired.

The game difficulty in S.T.A.L.K.E.R. affects the hit probabilities and damage for both the player and enemies. Because of this, the lower difficulty levels will have the player's shots miss more often, and thus the game may feel harder than expected.

S.T.A.L.K.E.R. leans towards deadly combat, with single bullets quickly depleting health. The Zone is also littered with plenty of anomalies that harm anyone passing by, even those going along a paved path. The game leads directly into a sink-or-swim approach, where your first task is to eliminate a camp of eight bandits with a weak pistol.

Despite this, it is easy to obtain supplies. There is more than enough money to purchase any necessary ammunition an medikits, plus it is possible to wait in a safe location to recover from injuries. Artifacts can also assist in speeding up regeneration as well.