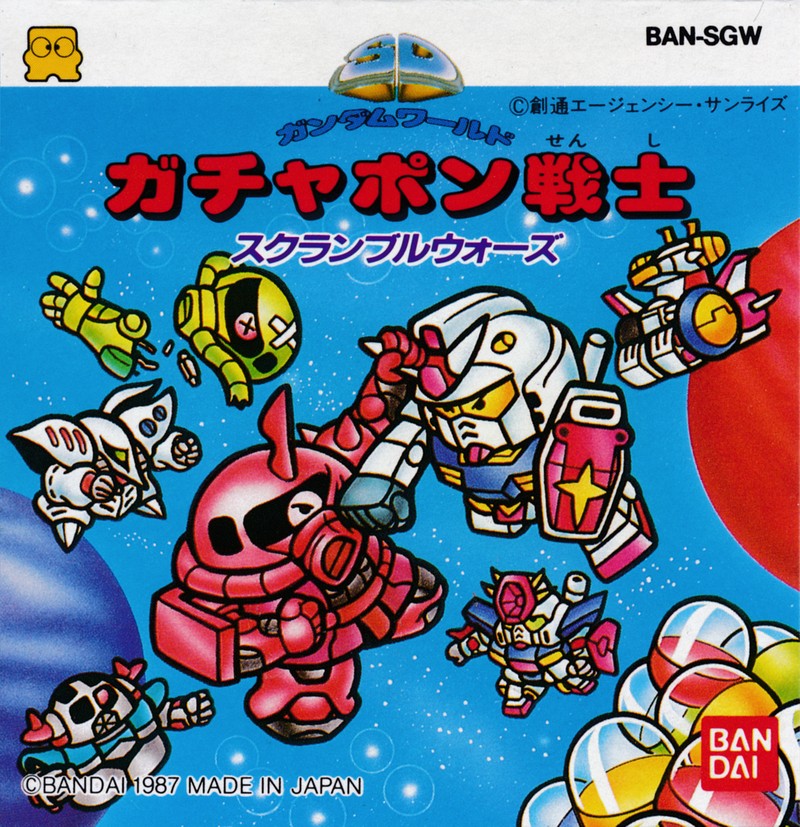 SD Gundam World Gachapon Senshi - Scramble Wars (SDガンダムワールド ガチャポン戦士 スクランブルウォーズ, SD Gundam World Gachapon Senshi - Scramble Wars ?) is a hyrbid strategy/action game based on the popular Gundam toy series from Japan. It was developed and published by Bandai for the Famicom Disk System. "Gachapon Senshi" means toy capsule warrior, as the gachapon toy capsule was a popular format for fans of the series to buy super-deformed versions of their favorite Gundam characters.

Two different versions were released within two months of one another. The initial version was sold in stores for ¥3,300 at the end of 1987 on its own disk with a case. The second version was sold for a much cheaper ¥500 in the beginning of 1988 as part of the "Disk Writer" system, where players could bring their own blank disks to a kiosk and have a game of their choice written to the disk. While both versions contain 10 maps to play on, the Disk Writer edition replaces five of the maps from the original edition with new designs. On March 3, 1989, a version of the game entitled SD Gundam World Scramble Wars Map Collection was released through the Disk Writer system, which allowed players to play on 10 brand new maps.

While the game is considered memorable, especially for being the first in a long line of SD Gundam World games to come, the single-player experience is known for having considerable flaws and a high level of difficulty. While one could forgive the long load times common among the Famicom Disk System games, it was much harder to overlook the exaggeratedly long periods of time that the computer AI took to plan out its moves. This could range from thirty seconds to a several minutes just for one of the three possible commands. Additionally, entering into combat against the computer was a difficult challenge, as the computer opponent played with lightning fast reactions that human players could not compete with without an exceptional amount of practice. It was, however, possible to trick the computer into trapping itself against obstacles on the right maps.

Despite these flaws, the game was ported two times, first to the Game Boy Advance in 2004 (in single-player only mode no less) as the 30th and final entry to the Famicom Mini Collection of games. While the long load times of the disk system format were removed, the considerably long decision making process by the computer remains. The game was later released as part of the Wii Virtual Console in 2010. The game has only ever been released in Japan, and has never been translated from Japanese to any other language. 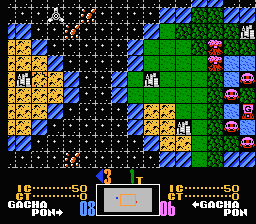 Two teams, the blue army and the red army, compete on tiled maps in an attempt to vanquish one another in battle. Each team starts off in one particular portion of the map, usually but not always on opposite sides. Throughout the map are cities which start out neutral, but can be converted to the red or blue side through occupation. The more cities a team has, the more energy that team produces every round to direct toward the construction of newer and more powerful Gundams. Each team gets to issue three commands per turn, whether it be to move a Gundam around the map, or construct a new Gundam. Each type of robot has different ranges of movement, and different terrains effect how far a robot can travel. In order to destroy each other, players must attack the opposing team's Gundams by moving one of their own to a tile occupied by the enemy. When two Gundams rest on the same spot, a battle is initiated. 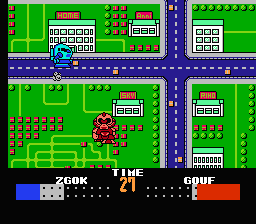 In combat mode, two robots must fight one another until either one is destroyed, or until time runs out. All robots possess a ranged attack and a close-combat attack. Players are forced to stay within the screen's distance from one another. Each player must attempt to hit the opponent by shooting at them or swinging a close-combat weapon when they are within range of each other, and successfully drain all of the opponents energy. If one robot is destroyed, the victor returns to the map and occupies the contested tile. If time runs out, the player with the most energy gets to stay on the tile, and the loser is ejected to another tile a short distance away. During the battle, items may float on to the screen, such as extra energy or speed, which one player or the other can collect in an effort to gain an advantage in battle.