It is important to understand the three different types of abilities that a Character card might have. There are Triangle, Square, and Circle abilities.

Each Character can only be backed up by a particular set of cards. You can check to see which characters are accepted as back-up by looking at the card data. If your character is an SNK character, then all of the SNK characters that can back this character up will be displayed. Likewise for a Capcom character and its acceptable Capcom back-ups. However, if a character can be backed up by a character from the opposite universe, that character's name will appear as question marks until you discover who that character is and use him or her as back-up for the first time. After that, the name will always be visible to you. 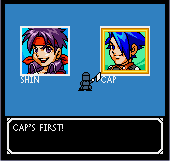 After selecting an opponent to duel against, the scene will switch to the battle ring. A few events will take place that you have no manual control over, such as shuffling your deck and selecting the top five cards. Then Kuroko, the referee that appears in the Samurai Shodown series, will appear between your icon and your opponent's as a cursor alternates stadily between them. This is something of a coin toss to determine who goes first, and you must tap the A or B button to get him to stop and choose a player (which he will do by pointing one of his flags at that player's icon's direction). Once a player is selected, the duel begins.

TIP: With time, as you play further, you might figure a pattern for this "coin toss" and use that to your advantage so you can always get a headstart and further ellaborate on your strategy. A common tactic is to hit the button as soon as you see the cursos leaving your icon.

Activate Phase: Any character in your ring that was previously frozen is now unfrozen. Cards are frozen when they attack or use an ability attack during your turn. In the very first phase, any card in your ring that attacked is free to attack again. Likewise, any character that used a square ability to attack the opponent, or attack his cards, can use that ability once more. Occasionally, your opponent may use an Action card or a Character ability that will prevent some of your cards from unfreezing in this phase. This phase is passive and automatic, requiring no action on the part of the player. Every turn other than the first one starts with this phase - matches start straight from Phase 2. 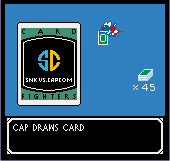 Draw Phase: After Phase 1 ends, the robot from Capcom's Forgotten Worlds appears to deliver a card from your deck to your hand. Occasionally, your opponent may use an Action card or a Character ability that will prevent you from drawing a card in this phase. If by some misfortune, a player has no more cards at the start of this phase, they automatically forfeit the match and lose. This phase is also passive and automatic, requiring no action on the part of the player. 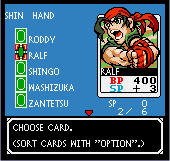 Main Phase: This is the first phase in which you are given control. You are given the ability to take any of the following actions in any order, but the phase comes to an end once you execute an attack. 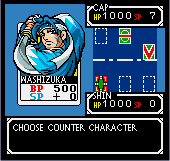 You may also choose not to counter attack, but you should only do so if you have any kind of strategy devised (for example, trying to add up SP in order to unleash an Unite Attack powerful enough to wipe away a good amount of the opponent's HP).

When the player ends Phase 4, his/her turn ends and it is passed on to the other player. In three cases may the turn end in Phase 3:

This is a short example of play between two players. It does not continue to the conclusion of the battle, but does demonstrate some of the common rules of the game.