SNK vs. Capcom: The Match of the Millennium 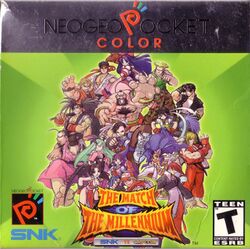 SNK vs. Capcom: The Match of the Millennium (頂上決戦 最強ファイターズ SNK VS. CAPCOM, Choujou Kessen Saikyou Fighters SNK vs. Capcom) is a fighting game that was developed by SNK and released in 1999 for the Neo Geo Pocket Color hand-held system. It features characters from various Capcom and SNK franchises, most notably Street Fighter II and The King of Fighters. It is the very first installment of a loose series of fighting games based on the concept of Capcom fighter competing against SNK fighters.