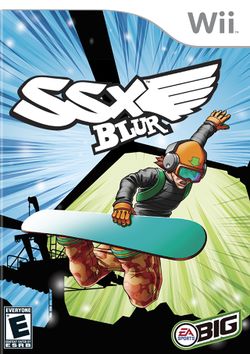 SSX Blur is an extreme snowboard/ski racing game by EA BIG, a division of Electronic Arts. The player chooses one of (initially) four characters and competes in events, challenges and tournaments to unlock new gear, abilities, characters and courses. The game differs from previous games in the series, in that it takes advantage of the Nintendo Wii controller for control of the character.