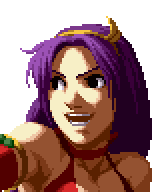 While Athena Asamiya became popular in her own right as a character in The King of Fighters series, she was originally based on the goddess portrayed in SNK's 1986 arcade game Athena. SVC Chaos is the first game to feature the original goddess as a fighting game contestant. She serves as one of the ultimate bosses in the game, the guardian of heaven, as opposed to Capcom's Red Arremer who serves as the guardian of hell. She is upset to find that the dimensional doors to heaven have been torn open as a result of the fighting that is occurring between all of the characters. Those who request to be sent back to earth are met with her cold reply that her only mission is to defend the gates of heaven, nothing more. Although she seems to immediately recognize evil when she sees it, especially in the case of Shin Akuma, or when it's misplaced such as with Violent Ken, she is not noticeably sympathetic when someone with a good heart arrives. She appears more annoyed about the fighting. She does seem to want to help Genjuro, and would comply with Tessa's request to stay if it weren't against her duty. She also appears to flirt with Kyo (a nod to how her descendant, Athena Asamiya, has a crush on Kyo), but becomes upset when she thinks Terry is staring at her figure. Since Goddess Athena is design after her original video game debut, she features abilities that are derived from that game. Her move-set is greatly expanded upon in NeoGeo Battle Coliseum, where she is also a hidden character.