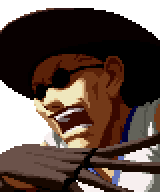 For the very first time since his creation almost ten years earlier, Choi Bounge appears as an independent fighter without his extremely large partner Chang Koehan. Ever a wise-cracker, he opens his mouth before he thinks trying to use his pleasant nature to talk him out of sticky situations, as he does with Geese or M. Bison. He refers to everyone as "buddy boy" (adapted from the de yansu quote he commonly uses in his phrases in the Japanese version), and is extremely sensitive about his short height. He is very quick to anger when many of the larger fighters dismiss him as a pest. Even Zero dismisses his diminutive stature, much to Choi's disappointment. He has fairly good recall on a number of the fighters that he encounters, although he almost mistakes Dan for Ryo. He is able to recognize that Mr. Karate is actually Takuma, much to Takuma's distress. He recognizes Chun-Li as a cop that once arrested him and got him thrown in jail. He also recognizes how powerful Shin Akuma is, and says "Game over, buddy boy" before fighting him. Upon encountering Vega, he believes that Vega is trying to copy his style by employing claws. Naturally, when he encounters his grueling Tae Kwon Do instructor Kim, he tries to talk his way out of the situation, before ultimately giving in to a match.