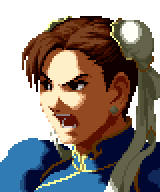 Chun-Li is ever the consumate professional, always on-duty as an agent of the international police agency known as Interpol. In her mind, everyone is a suspect that needs to be interrogated, if only to be mined for useful information about known criminals. She is aware that Kim has attempted to reform two known criminals, but does not approve of his decision to work outside the justice system. Whenever she encounters a known felon, she will engage them in combat for the purpose of apprehension, as she attempts to do with Balrog and Geese. However, there is one criminal that is on Chun-Li's mind more than any other: M. Bison. Bison is responsible for the death of her father, another member of law enforcement. She hunts him down in earnest, and interrogates everyone known to associate with him, including Sagat and Vega, attempting to find Bison's whereabouts. However, Chun-Li also has a warm and friendly personality, and is well liked by those who consider her a friend. She engages in friendly matches against Guile, Ryu, and Ken, and recognizes that something is wrong with her friend when she encounters Violent Ken.