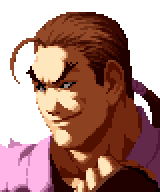 Dan is a living joke. His entire existence is due to a humorous character design that Capcom chose to include in Street Fighter Alpha. Dan is intended to have the body/costume of Ryo Sakazaki, with the head of his friend/rival Robert Garcia. So it is quite natural that several SNK characters who are familiar with Robert have a difficult time distinguishing Dan from the genuine article. Choi, Kasumi, and Terry all confuse Dan for Robert. Even Dan will mistake himself for Robert if he meets his double. The fact that people don't recognize him upsets him a great deal, because Dan is extremely famous… in his own mind. He is the creator of Saikyo Groove, which is supposed to mean Strongest, although Dan spells the word with the wrong letters. He has a hard time understanding why people aren't more impressed when they run into him, like Chun-Li, and thinks that if someone is trying to avoid getting into a fight with him, like Ken, it's because they are scared. Dan is the only person that Demitri has little desire to dominate, Hugo and Poison have no desire to recruit, and Tessa has no desire to study and learn anything from. He doesn't even turn into a demon if Red Arremer beats him! Dan is still seeking revenge on Sagat for his father's death, and mistakes Mr. Karate for his own father on multiple occasions. Dan is still, as always, the master of taunting.

* If Dan can successfully perform the Chohatsu Densetsu uninterrupted, both fighters will be instantly put into MAXIMUM mode.