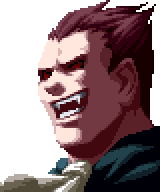 For more information about Demitri, see his Darkstalkers entry.

Among his fellow Darkstalkers, Demitri is an above average competitor. Among regular humans, however, Demitri's vampiric power makes him akin to a small god, a fact which Demitri revels in and is happy to gloat about. As a vampire, he has to power to end mortal life, and grant immortality in its place… at the cost of one's free will. Once bitten, his victim becomes a willing slave to Demitri's cause, even to the point of self-sacrifice. Demitri's presence during the events of SVC Chaos are unexplained, but he does take the time to challenge all who cross his path, offering the same thing each time, immortal life under his command, although he far prefers victims who are both beautiful and powerful. He has a unique ability to transform all of his victims into a form he deems more fitting (that usually includes making all the males female) before biting them, through a power known as Midnight Bliss. Upon meeting him, Akuma sees him as a worthy opponent immediately. Demitri does not consider M. Bison to be entirely human. Demitri is the only person to somewhat recognize Red Arremer as the guardian of Astaroth's realm, an enemy of his.