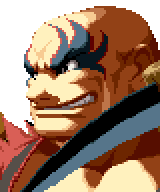 For more information about Earthquake, see his Samurai Shodown entry.

Simply put, Earthquake is a shameless burglar who uses his enormous size to commit crimes and obtain wealth. Earthquake is quite unabashed in his desire for money. In fact, it's pretty much all that he's concerned with throughout the events of SVC Chaos. He sizes up every opponent to determine if they have anything valuable on them, and proceeds to rob them if he thinks they do. While he is American by birth, originally from Texas (despite Texas belonging to Mexico in Samurai Shodown's timeframe, something that's always been ignored by producers), fellow Americans such as Guile find him disgraceful. He's also has a rather offensive odor, which Tessa and Kasumi find quite remarkable for different reasons. Choi believes he may be bigger than Chang, and Kim perceives Earthquake as a potential rehabilitation project. M. Bison also sees Earthquake as a potential recruit for Shadowloo, but Earthquake will accept nothing less than a leadership position, and calls M. Bison "big chin." He is quite derisive to women in general. Chun-Li asks why he doesn't lead a clean life, but Earthquake dismisses her. Earthquake not only contains many pig-like features, he typically snorts throughout his conversations, even turning into a pig should Athena curse him upon defeat. Even Earthquake thinks his double is rather ugly.