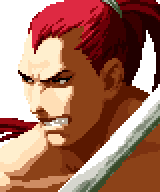 For more information about Genjuro, see his Samurai Shodown entry.

Genjuro is the sworn rival of Haohmaru from the Samurai Shodown series. Genjuro's outlook on life is, to put it mildly, bleak. He sees nothing redeemable in mankind, and thinks nothing of reducing it's number one by one with his blade. While Dhalsim sees a man who chooses to walk along a dark path, Genjuro believes it is simply coincidence, and not choice, that the path he walks along is dark. Athena seems to believe that she could save him if he'd allow her to. Most fighters who encounter him are surprised to find a man wielding such a large sword, and the more confident fighters consider Genjuro to be a coward by not choosing to fight barehanded. Genjuro doesn't care. He is even slightly impressed upon finding out that Zero is a fellow swordsman. His oddly fashioned red hair reminds Kyo a little too much of his rival, Iori, whom Genjuro shares a similar level of cynicism with (they even say the same thing to each other when confronting themselves). He and Shiki rub each other the wrong way when they encounter one another, as both are seeking Haohmaru for their own purposes.