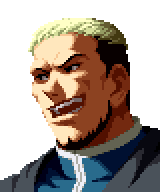 Goenitz is a servant of the order of the Orochi. From a young age, he knew he had a duty to revive his lord, and became a priest to meet that end. While many would consider the Orochi a power for evil, Goenitz believes instead that it is the human race that is evil, and that the power of Orochi will cleanse the world, as he explains to Tessa. However, in order for the Orochi to appear, he must find hosts that are worthy of Orochi's power. Goenitz is confident that he will successfully bring about the return of Orochi, and that he may even reside in heaven, as he tells Athena. He recognizes that Demitri's unholy goals are in opposition to his own. Many of the events in KOF '96 are recounted in the dialog between Goenitz and other key members. He wishes to reclaim the Orochi power possessed by Iori, and Kyo wants nothing more to do with the Orochi events. Upon encountering a double of himself, he suspects a trap placed upon him by the Miko priestess Chizuru Kagura. Goenitz is gifted with the power to control wind on some level.