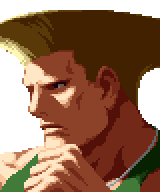 Guile is a soldier first and foremost, and everything else second. His duty is his life, and will go to any extreme to carry out his assigned mission. However, since the disappearance of his commanding officer, mentor, and closest friend Charlie, Guile has only had one thing on his mind: to seek out and take down the man responsible, M. Bison. Whenever he encounters fighters who are known to associate with Bison, such as Vega and Sagat, he immediately interrogates them, which always leads to brawls. But Guile is not as single-minded as he may appear. Deep down inside, he has a devotion to his family that is much harder to express than his duty to his country. When Athena faces him with the notion that he might be separated from them, he finds the thought unbearable. Guile also appreciates the natural order of things and understands well that death is a part of life, a philosophy that Demitri finds foolish. Guile is also a loyal friend, and enjoys friendly competition with associates like Chun-Li, Ryu, and Ken. Guile is also one of the few to recognize Ken's brain washing when he encounters Violent Ken. As a soldier, Guile stays in shape, as fact admired by both Poison and Kim. Having access to a number of military secrets, Guile is about the only person who comes close to identifying Zero, although he mistakes him for Mega Man.