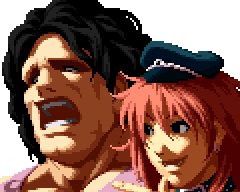 Hugo is a man of few words; his partner Poison does a lot of the talking for him. Hugo and Poison are from the tough inner-city streets of Metro City. After the fall of Mad Gear, they've decided to hit the road and pursue a career in pro-wrestling, something which Hugo's gigantic frame is well suited for (his character design was influenced in part by Andre the Giant.) For whatever reason, however, the managers of the local wrestling talent insist that in order to be successful, Hugo needs a tag team partner. So Hugo and Poison are forced back out on the streets in order to find a person who could draw a good crowd. A majority of their confrontations go the same way. Poison sizes a challenger up and decides what role they would be best at in a pro-wrestling league, and "offers" them an opportunity, never accepting no for an answer. Should they refuse, Poison calls Hugo to the spot, and tells the other person that if they lose, they'll work for Poison. Poison is definitely the brains of the outfit (with what little she has) and assumes that everyone else will earn her a paycheck while she cashes it. Not one fighter is interested in the prospect of working with them. Balrog, money-hungry as ever, is the only one to fancy the thought, but backs out when informed he won't get paid for it.