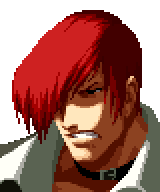 For more information about Iori, see his KOF (Orochi Saga) and Capcom vs. SNK entries.

Iori is resigned to his fate as the bearer of the Orochi Power. He seems to experience no joy in life, even when fighting. He rarely provokes any fights, but he is confident that he will silence any challenger that crosses his path, especially his rivals. Iori is fueled by the desire to seek out and defeat his long standing rival Kyo, who does not appear to share the same level of concern for their families' bitter conflict. Iori is a pain to Kyo, but Kyo is a reminder of Iori's failed efforts to vanquish his younger foe. Even the mere comparison of Iori to Kyo by Ryu enrages Iori. But nothing evokes more fear over Iori's fate than a chance encounter with a double of Iori that has already entered the Orochi Blood Riot state. He vows to defeat his Orochi tainted double and never allow that fate to befall him. Demitri and Tessa seem to sense an interesting combination of powers in him that fascinate them. Either out of seriousness or uncharacteristic humor, Iori quotes Shakespeare to Chun-Li and says "get thee to a nunnery."