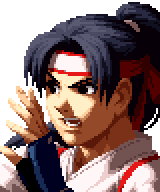 For more information about Kasumi, see her Art of Fighting and KOF (Orochi Saga) entries.

Kasumi Todoh is interested in two things, and two things only; proving the worth of her father's fighting style, the Todoh discipline, and finding out the location of her missing father. Kasumi believes that nearly everyone she comes across knows something concerning the whereabouts of her father, even people that would have no reason to know, such as Guile, Sagat, Terry, and even the Red Arremer. In two cases, she directly accuses people of harming her father, including Demitri who she believes may have transformed him into a zombie (although Demitri protests and says he doesn't drink the blood of males), and Hugo, who she thinks kidnapped him and forced him into pro wrestling. She challenges Ryo to a fight in order to avenge her father, and does the same to Dan, mistaking him for Robert Garcia. Geese is one of the only people in the game to have actually known Kasumi's father, a fact which almost distracts her from the fight. She seems to be on very friendly terms with Kim, and recognizes Mr. Karate as Takuma. She's also quite belligerent, picking fights for the pettiest of reasons, such as with Ryu (who was just watching her train, and she thought he was spying on her) and Chun-Li (who just wanted to praise her legs - despite them being concealed by the hakama she wears - , and the girl took it as an insult before the Interpol officer could finish).