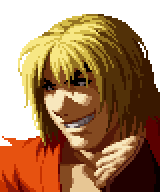 The only thing that Ken has more than wealth, is his competitive spirit. He loves the thrill of a good fighter, and his undefeated American championship rank gives him a well deserved confidence that boarders on cocky. But wherever he goes, and whoever he fights, there's only one battle that truly means anything to him; the rematch he wants to have with his childhood best friend and rival Ryu. Though Ken can be quite the tease on occasion, deep down inside, his heart is pure, and he only ever wishes to do the right thing. He enjoys competing with fellow American fighters like Terry and Guile. While he is supremely confident of his own style, he recognizes the strength that others have in their own abilities, like Kim and Mr. Karate. Although he comes to find out that Akuma is the man that murdered his sensei, he does not appear to know that throughout the events of SVC Chaos, and simply regards Akuma as a very strong challenger. His encounter with M. Bison appears relatively ordinary, but the events that follow their battle are anything but. M. Bison uses a combination of his ow Psycho Power as well as a form of torture to brainwash Ken and turn him into the entity known as Violent Ken. When a double of Ken encounters this Violent Ken, he wonders if there is an aspect of Violent Ken that is innate in himself that wanted to become such a monster.