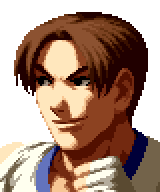 Kim Kaphwan, a master of the Korean martial art Tae Kwon Do, has a fairly one-track mind. He fights for no other purpose than to spread justice throughout the world. In his vigilante mind, he will put right all the wrongs in the world, one battle at a time. When encountering certain petty criminals, such as Earthquake and Balrog, he is certain that under his tutelage, he can make honest descent people out of them, as he has done with Chang and Choi. But when he comes across pure unadulterated evil, such as Akuma, Demitri, Geese, and M. Bison, he is certain that no good could possibly come from them, and that they must be defeated by his hand. When he encounters Chun-Li, she is only interested in arresting Chang and Choi and placing them in proper judicial custody. He is cordial with everyone that he meets, and admires fellow fighters such as Guile and Ryu. He is always ready to show others the might of Tae Kwon Do over other fighting styles, as well as the meaning of justice, an offer which Tessa appears to be more than a little intrigued by (though this might be mostly due to his comment that "Justice courses through [his] body"). He is on very friendly terms with Kasumi Todoh.