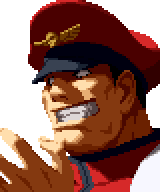 M. Bison is a very ambitious man who will go to any lengths to succeed in his mission to take over the world. He is convinced that he can succeed where others have failed by focusing on the one true thing that means anything in his world: power. When constructing his army, he seeks only the strongest and most powerful fighters in the world. While it's nice if they except his offer willingly, he has no problem gaining their acceptance by force—in fact, he prefers it that way. He thinks of a role in Shadaloo suitable for every fighter that he encounters which he believes to be powerful. He is intrigued by Kyo and Iori, believes Shiki would make an excellent bodyguard, and considers putting Kasumi in the roll of one of his Dolls, like Juni, Juli and (formerly) Cammy. Bison finds Geese's lack of confidence in his ability to rule the world humorous. Bison despises disloyalty and is only too happy to punish those who cross him, like when he encounters Balrog, Sagat, and Vega. At this time, there is really only one man that Bison fears and that is Akuma. Bison has experienced the pain of the Shun Goku Satsu and lived to tell about it. Bison also makes the same mistake from the past, of underestimating Chun-Li, who is searching for to avenge her father's death.