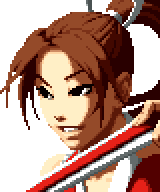 If there's one thing that Mai is not, it's shy. Mai has no qualms about talking to anyone, anywhere, anytime. Her sense of decency also deviates from the norm, as while many would suggest that she is scantily clad in her highly revealing outfit, Mai simply feels that she's dressed in traditional Shiranui ninja garb, and that no one else should have any problem with it. Americans like Ken and Guile mistake her purpose based on their conception of what Japanese women are supposed to be like. Even Ryu, a fellow Japan native, remarks that in her ninja "outfit," people can see her coming from miles away. Mai's goal during SVC Chaos, as with so many other appearances, is to hunt down her true love, Andy Bogard. She is desperate for information, even if she has to battle it out of her opponents. She tends to think that many people, such as Kyo, Choi, and Andy's own brother Terry are hiding information about his location from her. Mai is sensitive about her weight, as illustrated by her conversation with some fighters, such as Dhalsim, and she can be quite catty with other women, like Athena, Chun-Li, and Tessa. She is very optimistic, and her confidence tends to diminish her sense of danger, such as when she's faced with stronger opponents like Akuma and Demitri.