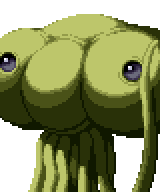 Very little can be determined about the Mars People since we do not understand their language - except that it's composed of "beep"s, "bop"s, "bap"s and similar sounds. Their specific purpose for visiting Earth is unknown, as is their goal in events of SVC Chaos. Fighters who encounter them are incredulous, sometimes too stunned to respond. Chun-Li attempts to communicate with the Martian in Chinese, Japanese and even Korean, to no avail. Many fighters are under the assumption that it is angry, and acting aggressively towards them. Some fighters see capturing the Mars People as an opportunity. Guile reacts by instantly wanting to contain it for government study, while Tessa wishes to research it personally, and Dan wants to defeat it to make himself universally renowned. Other fighters such as Balrog, Choi, and Hugo see the Mars People as an opportunity for financial gain. Only the operatives from Metal Slug, known as the Peregrine Falcons Squad, have any familiarity in dealing with the Mars People, and none of them are present through SVC Chaos. Mars People reappear as a secret character in NeoGeo Battle Coliseum.