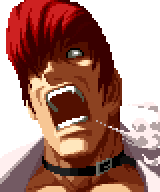 Riot of the Blood Iori

For more information about Orochi Iori, see his KOF (Orochi Saga) and Capcom vs. SNK entries.

This is the version of Iori who has lost control of his mind, and has become consumed by the Orochi power that previously lay dormant inside of him. He has lost all sense of his own being, and has simply reverted into a primal killing machine, bent on destroying life wherever he encounters it. He doesn't even have the capacity to speak beyond grunts and groans, the word "kill", or Kyo's name, screamed aloud should he meet him. Fighters who have dealt with him in the past, such as Kyo, Mai, and Terry, recognize him immediately, and know what must be done to return him to normal. If he faces another regular Iori, regular Iori is disgusted by what he sees and vows never to allow it to happen to him. Sagat ponders if Orochi Iori is the fate that befalls all those who are consumed with desire for power. And a chance encounter between Orochi Iori and Violent Ken reveals that the brainwashed Ken has looked forward to the battle that will follow.