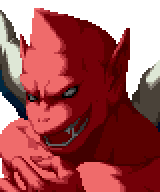 In contrast to SNK's Athena as the guardian of heaven's gate, Capcom's Red Arremer is the guardian of the entrance to hell. He appears as a red winged demon, and is unable to say anything intelligible to the fighters that he encounters (the conversation between him and the Mars People is one of the least constructive in the game, along with Zero and Shiki's "dialogue".) However, Red Arremer is not unintelligent, he simply doesn't speak English. Within his own demon home world, he is actually considered quite a hero, having restored the balance of power several times. Since he sees no worth in befriending humans, he never bothers. The fighters who encounter him have a wide range of reactions to the site of him. Kim believes he can rehabilitate the Red Arremer. Kasumi thinks he knows where her father is. And Ken, never one to believe he might actually be in hell, thinks that he has stumbled into a lively amusement park. Tessa is the only fighter who is actually delighted to find him, as she considers it a rare and lucky chance to study such a creature. Fighters who defeat Red Arremer are returned to the realm of the living, but if they lose, they are transformed into a demonic being (except for... Dan).