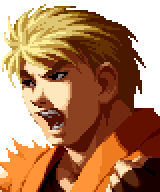 For more information about Ryo, see his Art of Fighting and KOF (Orochi Saga) entries.

Ryo Sakazaki is a very confident fighter who enjoys sparring against challenging opponents. He doesn't look too deeply into the meaning of things, and is satisfied to take much of what he sees at face value. For example, rather than being intimidated by the likes of M. Bison and Sagat, he simply engages in small talk with them about the former's outfit and the latter's size. He is proud of his Kyokugen heritage, the style of fighting taught to him by his father, Takuma, or Mr. Karate as he is sometimes known. Whoever he encounters, he is happy to fight against them whether it is in good natured fun, or for the sake of defending his reputation. He is quick to antagonize those who don't warm up to him immediately, whether it's someone he has met before, like Iori, or someone he is meeting for the first time, like Guile. He also has his share of people who are looking to settle a score with him, such as Kasumi who thinks he had something to do with her father's disappearance, and Dan who thinks that Ryo's style is just a rip off of his (when in fact it is the other way around, development-wise). There is one bit of inconsistence. within the game's dialog. When Ryu comments that Ryo is the Tiger, Ryo comments that he is the Dragon, and his father is the Tiger. Ryu, confused, says he thought that the Dragon was the "ratty one," referring to Robert, who does in fact utilize the Dragon style of Kyokugen while Ryo utilizes the Tiger style like his father (the Ko in Ko'ou Ken and Kohou means "tiger").