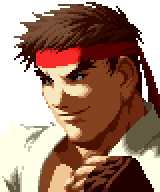 Ryu eats, sleeps, and breathes fighting. From an early age, it's been the only life that he has ever known. As a result, he has come to acquire a lot of knowledge, not only about his own style of martial arts, but about many others that are practiced throughout the world. He can identify most of them on sight. Ryu understands that to be a fighter is not about winning or losing, but to constantly seek challenging opponents that can help him improve himself as a fighter. Whether his opponent is a powerhouse like Demitri, or the complete opposite like Dan, Ryu is always interested in testing himself against others. Ryu can also identify if someone is a master of their art, like Kim or Mr. Karate. Ryu is rarely concerned over whether his opponent's fight is good-natured, as with Guile and Chun-Li, or with bad intentions, like Genjuro or Vega. All that matters to him is the competition. Ryu has very little family in the world, and counts Ken as his own brother. He is deeply disturbed to find that Ken was brainwashed and turned into Violent Ken, and is determined to snap him out of it. There are also very few who would call Ryu an enemy, and Sagat is at the top of that list. Ryu understands that by allowing himself to be taken over by the Murderous Intent, or Satsui no Hadou, in order to triumph over Sagat, his victory is tainted, and he has struggled every day since to avoid Akuma's fate.