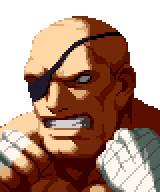 For a long time, Sagat truly believed he was invincible. His natural stamina and physique allowed him to soar to the highest ranks of the competitive kickboxing world. Becoming the reigning champion of several world street fighting tournaments was a given. But his world came crumbling down in a single instant when a young and untested martial artist named Ryu bested him with an impossible strike that left a scar across Sagat's massive chest, a constant daily reminder of defeat that robbed him of everything. His rank, reputation, and self-confidence were all robbed on that day, and it has consumed him. At that time, he was easy prey for M. Bison as a recruit. But Sagat has been doing some soul searching, and he has come to understand many things about life that the younger Sagat did not know. He has come to understand that very little is a given in life, and that luck is not a substitute for skill. At the very least, he has restored his own self worth, and still considers himself to be an emperor among lesser fighters. He is taking steps to break off the shackles that hold him to Bison's side, and refuses an offer given to him to serve Geese. To Sagat, all other fighters are mere annoyances who must be put in there place. Only Ryu holds a special place in Sagat's mind, one that is reserved for the coldest and most brutal revenge imaginable. Likewise, it is Sagat who is the target of Dan's revenge for the murder of Dan's father, the same man who robbed Sagat of his right eye.