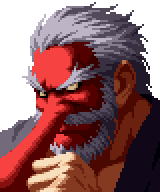 For more information about Mr. Karate, see his Art of Fighting entry.

Compared to ordinary Mr. Karate, this version is determined to battle every opponent with his full strength. While ordinary Mr. Karate only uses as much strength as necessary to subdue an opponent, Serious Mr. Karate does not limit his power in anyway, nor does he even attempt to mask his body's aura of power from those he is about to face, making it obvious to the more sensitive fighters what danger they may be in by facing Serious Mr. Karate. He is, as his name implies, more serious, and less jovial. In this form, Takuma has elevated his power beyond normal human capabilities, through years and years of training. When he encounters Akuma, Akuma regards him with the same respect that he gave to Gen, upon realizing what a worthy opponent Mr. Karate would make. While Mr. Karate's abilities have exceeded normal humans, as noted by Demitri, he has not become a victim of his own desire for power, and hence does not have the ability to tap in to raw energy as Shin Akuma can. This Mr. Karate is far more determined to punish the likes of Geese for the improper choices he made in life.