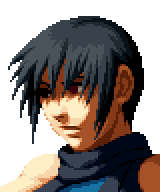 Shiki is a woman with a doomed fate. Before she was born, her soul was tampered with by a being known as Yuga the Destroyer, and was turned into a mindless puppet when she reached adulthood. It was Yuga's plan to mate her with an acceptable male to bring about Yuga's resurrection in the human world. The male chosen by Yuga to be Shiki's mate was Haohmaru. From that moment on, Shiki was driven by no thought other than finding Haohmaru. Though that storyline would resolve itself in the events of Samurai Shodown 64 (her battle with Haohmaru results in freeing her mind from Yuga's control), she is clearly still under Yuga's influence at this time. Every encounter that she has in SVC Chaos results in only one thing: the disappointment that the person she has found is not Haohmaru, and the need to destroy whoever gets in her way. When he stumbles across Genjuro, they immediately despise one another for seeking the same target. The power that controls her reads similar to the Murderous Intent, or Satsui no Hadou, to those who are familiar with it, such as Akuma and Ryu. Dhalsim attempts to use Yoga to free her mind, but realizes that she is too deeply bound by Yuga's spell. When Tessa encounters Shiki, Tessa almost immediately recognizes the source of Shiki's control. The only person that Shiki seems to indicate an ounce of sympathy for is Iori, recognizing the struggle that he is under both before and after the Orochi power claims his mind.