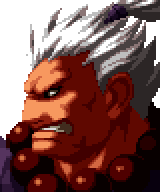 Shin Akuma, or True Akuma, is the version of Akuma who fights with his entire strength, and does not hold back any of his power for the sake of his opponent's life. Whatever remaining shred of humanity Akuma had left, including the ability to think rationally, and basic communication, are now gone. Even Geese, who sneered at regular Akuma, is in awe of Shin Akuma's power. Even the most confident fighters realize they are up against something inhuman when they encounter Shin Akuma, with the exception of Mr. Karate who calmly accepts his approach. Shin Akuma does not find happiness in battle, only in slaughter. He is, however, interested in seeing one other follow him down his forsaken path: Ryu. Though he can communicate lucidly from time to time, he usually reverts to verbal expressions of the purpose for his existence: "Rumble" and "Destroy".