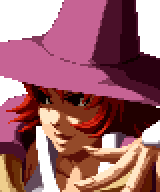 For more information about Tessa, see her Red Earth and Pocket Fighter entries.

Tessa is not from this Earth, but from a land known as Icelarn in an alternate dimensional version of our planet known as Red Earth, where sorcery is much more common. In this world, Tessa appears to conform to the appearance of a witch, but Tessa doesn't dabble in the practice of magical spells, so much as she utilizes magic to aid her experiments and make empirical observations about the results to explain scientific phenomenon, therefore leading her to call herself a "sorcerologist", i.e. a scholar in the ways of sorcery. During her journey through our world, she is on a non-stop quest to learn about anything and everything that she encounters. She endeavors to learn about the Satsui no Hadou, Yoga, the Secret Scrolls of Jin, Samurais, the Orochi, Psycho Power, and even Kim's justice. Even beyond the world, she would love to study heaven, or the nature of the Red Arremer that guards hell. Tessa is so well knowledged, that she knows of things that few others do, such as the source of Shiki's mind control, and the nature of Zero. Yet all of that knowledge is not enough to quench her thirst and she seeks more, as much as possible. Unfortunately, she is frequently hindered by the need to explain her appearance and purpose to those who find it suspicious.