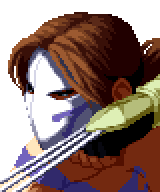 Vega values only one thing in the entire world: beauty. Vega is the living embodiment of vanity. His fractured mind is so obsessed with the notion of beauty that he believes only the most beautiful people in the world are worthy of living in it. All the rest must die, and he is happy to see to it personally. Vega wears a mask throughout a fight to protect his beautiful "perfect" face. Vega finds just about every fighter he encounters ugly, and therefore no longer fit to live. Only a few of the women fighters, such as Mai and Kasumi, are considered just passable in his eye. Of the men, only Iori and Kyo manage to catch his attention. Even so, he would gladly indulge his sick thrill of killing, since he finds beauty in bloodshed. Even though Demitri shares his appreciation for the truly beautiful, Vega finds his vampiric visage to be a deformity. His insanity has developed to the point that he even finds his own boss, M. Bison, no longer fit to live among the beautiful people, something which Bison has little tolerance for. Vega's insistence upon beauty above everything else gives him little pause when he faces even greater strength, whether it's Shin Akuma or Serious Mr. Karate. If they don't conform to his standard of appearance, they must be destroyed. But in Vega's mind, no one compares to his beauty, not even the double of himself that he encounters; each one believes that they are the prettiest.