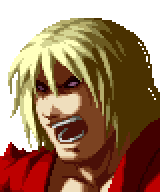 This version of Ken is the aftermath of an encounter with M. Bison that ended badly (as depicted in the events of the animated Street Fighter movie). M. Bison, in an effort to collect the most powerful fighters in the world and "invite" them into his army, seeks to capture Ryu, the renowned fighter that defeated Sagat. When he encounters Ken however, he realizes that his style is remarkably similar to Ryu's and will probably do as a substitute until he can get his hands on the real thing. Through a combination of torture and Bison's own Psycho Power, he amplifies Ken's fighting spirit by invoking memories of his training with Ryu mixed with pain. This process brainwashes Ken into a mindless force for destruction. Ken thinks only of fighting and killing everyone that crosses his path. Encounters with fighters that have a similar agenda, such as Akuma, Orochi Iori, and Shiki, rarely result in meaningful conversation. Those with extra sensory power, such as Dhalsim, Demitri, and Tessa, can tell immediately that Ken is being controlled against his free will. Those who know him, like Guile and Terry, know right away that he's not himself. Even Sagat, who cares little for Ken, knows that something is not right. Ken's only salvation may lie in the hands of his truest friend, Ryu, but it will take everything that Ryu has to put right what has gone so horribly wrong.