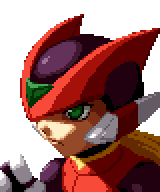 Zero is a cyborg from far into the future. For unknown reasons, he has been sent back to this time in the middle of the events that take place during SVC Chaos. Ordinarily, he seeks out and destroys Maverick Reploids (rendered in the game as "Irregulars" due to a translation error, its the original term in the japanese release) that have gone against their programming. However, in this realm, he is hostile towards most of the humans he encounters, as he finds them to hinder his ability to perform his assigned task. Throughout his travels, he is backed up by radio link to his partner Ciel, who has access to this time's database of information pertaining to each fighter. All she can do is warn Zero of particular aspects of each warrior, but it is up to Zero to deal with the threat, and he never backs down from any challenge. His diminutive height proves to be somewhat misleading to the various fighters he encounters, some people like Ken and Terry mistake him for a child. He wields an electric sword called the Z-Saber and carries a laser gun called the Buster Shot. He is also able to summon a variety of programs that aid him in combat, which are known as Cyber Elves. He does not waste words with anyone (his pre-fight conversation with Shiki consists of them simply staring at one another), and he has no specific dialog with any particular fighter that sheds light on his goals. Only Guile and Tessa come close to realizing what he truly is.