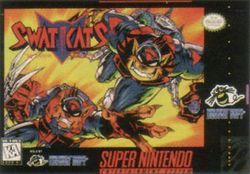 SWAT Kats: The Radical Squadron is primarily a platform developed and published by Hudson Soft in 1995. Unlike traditional platformers, the game features simplistic leveling system. At the end of every level, the game goes into a "Mode 7" third person flying shooter where the player commands a fighter jet in an attempt to take on extremely large enemies.

The game is based on the cartoon series of the same name and features both of the protagonists, the mayor of the city, and several of the villains shown in the show. It has a limited plot, but gameplay varies as different obstacles are thrown at the player, depending on the level chosen. Although it seems open ended at first, the end of the game is reached by simply completing all of the available levels.

Unfortunately for Megakat City, the most villainous criminals have simultaneously started to wreak havoc. Mayor Manx has turned to his last resort: the mighty SWAT Kats.