Sakura Wars: So Long, My Love 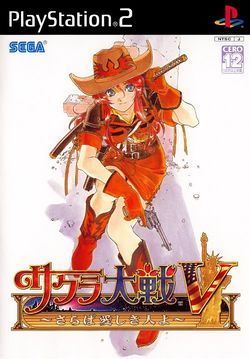 Sakura Wars: So Long, My Love (サクラ大戦V 〜さらば愛しき人よ〜, Sakura Taisen Faibu ~Saraba, Itoshiki Hito yo~?, Sakura Wars V ~Farewell, My Love~) is a tactical role-playing game with dating sim elements. It was developed and published by Sega, and licensed by Red Entertainment, as the fifth title in the Sakura Wars series for PlayStation 2 and Wii. It was released on PlayStation 2 in Japan on July 5, 2005, and it was released on PlayStation 2 and Wii in North America on March 30, 2010 and on the Wii in PAL territories on April 2, 2010. First revealed at the Tokyo Game Show convention in 2002, Sakura Wars: So Long, My Love is a title of the Sakura Taisen World Project compilation.

Set in an alternate universe New York City during the late 1920s, the game's storyline focuses on a naval ensign, Shinjiro Taiga, as he is summoned from Japan to New York to lead a fighting troupe disguised as musicians. Shinjiro's band must stop an evil warlord and his subordinates from conquering America as its kingdom. The gameplay includes elements from previous games in the series, such as the LIPS system and combat systems.