Sam & Max: The Devil's Playhouse/Episode 304: Beyond the Alley of the Dolls 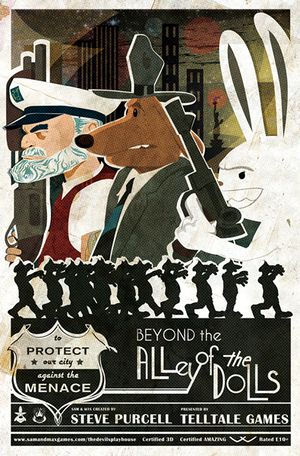 Sam & Max find themselves barricaded in Stinky's Diner and must find out how to stop the raving hordes of Sam clones ("Samulacra" or "Doggelgängers", if you will) that stole the Devil's Toybox in the previous episode. As all of Manhattan becomes overrun by toy-snatching clones, our intrepid Freelance Police delve into the mysteries of the scantly-clad Doggelgängers and uncover the truth about the dastardly fiend behind these sinister Samulacra. Is it the cranky Diner Owner? The spineless Space Ape? The Magical Curator? The Mysterious Doctor? Or is it some other force all together? Join us, friends, as we discover what awaits...Beyond the Alley of the Dolls!

You find yourself barricaded in Stinky's Diner, together with Grandpa and Girlie Stinky, as well as General Skun'kape who suffers from heavy sam-o-pathy. Now talk to everyone, also try to look at and use everything, and soon you will discover the radion on the counter. Use it, enjoy Skun'kape seeing red and being drawn out of the room. You as Max can now use the cards of Mind Reading, in addition to the Teleportation, Rhinoplasty, and Future Vision abilities that you know already.

Since the outlook is gloomy, escape is the word. Make sure you have looked at/used every available item in the room.

From the cloning facility is immediately reachable via tunnel: Stinky's Diner, the room before Paperwaite's office, and Momma Bosco's laboratory. In the facility, note the control platform with the controls, the coffee mug, and the hand-shaped device. Note also that magical tentacles prevent you from using the cooking controls. At Momma Bosco, don't forget to check the phone, so you can later teleport there. Likewise, before Paperwaite's office, check the trash.

You can now teleport to where Sal is working---it looks like the harbor---immediately you see some samulacra crashing with the DeSoto full of toys. The Ventrioquist toy Charlie Ho-Tep will fall off to the sideway. Pick it up. You can try to cross the street but the doggelgängers will chase you from the street. Teleport back to Stinky's Diner.

Girl Stinky is occupied with Flint Paper who accuses her of working against her grandpa. Talk to Flint and follow his lead, sooner or later you will be drawn into the lie that Girl Stinky prepared Grandpa's birthday party. To get a clue on the mysterious S., it will be necessary to cover the lie and free the girl.

As Sam says, to free the girl you would have to produce Grandpa Stinky's favourite birthday cake, and soon!

Grandpa Stinky will recognize the cake now, and Sam gets smooched by the girl. All persons leave the room. Now find out who Girlie was dating by following her through her phone number. Sam & Max's teleporting attempt brings them to the cloning facility, where they hide and become witness to a date with Sal. Unfortunately, you can't interrogate them further, as the master of the facility takes over their thoughts, and both Girl and Sal become enslaved.

The next chance for resolving the puzzle of the facility appears to be summoning Momma Bosco. She would know who the mysterious master is and what to do. You certainly noted by now that using the gong at Boscotech will start a séance. But a séance with only unbelievers will just not work. In order to run a good show, you will have to convince at least one of the participants.

Harry and Superball leave the room. But Momma Bosco is no help, either. However, note that you can now fiddle with the Dimensional Stabilizer but do you have information that can help with calibrating the machine?

You have now access to Paperwaite's office. You learn that Yog Soggoth actually was Dr. Norrington. Both he and Paperwaite are quite peaceful. You learn that the toy named Cthonic Destroyer can eliminate the sort of tentacles that prevent you from giving Momma Bosco a new body.

With the Cthonic Destroyer you remove the tentacles in the cloning facility. You can now try to make a clone of Momma Bosco.