Sam & Max Episode 202: Moai Better Blues picks up after Ice Station Santa, with Sam and Max arriving home after a month's long drive. In their neighborhood a triangular vortex is chasing their friend Sybil down the street, and when they stop the portal and head through it themselves, they begin a new adventure to save Easter Island from certain destruction by volcano.

Right off the bat, you'll likely notice the large red triangle chasing Sybil all over the neighborhood. Your first task is to save Sybil and find out what wackiness is taking place this time.

Just when you think you can notch your belt for another case solved, Lincoln gets sucked into the portal and Sybil jumps in after them. In order to save them, you'll jump through the portal after them and be transported to Easter Island. 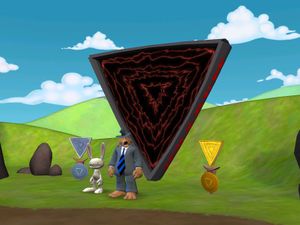 The triangle portal takes you to a tropical island.

You'll find that Lincoln and Sybil are doing all right, and have turned the trip into an impromptu vacation. Not all is well on Easter Island, however, as the Moai heads inform you of the impending disaster foretold by prophecy. The nearby volcano will erupt and rain down fiery death on the island if you don't stop it. Your only clue is to find the secret underground cave and explore it for a way to stop the volcano god.

In this area you'll find the Fountain of Youth at the right end and the secret cave entrance on the left where the path forks off to Tiny Tiki. In between are the Moai heads and your friends' picnic. You can return to your street via the portal triangle. As you try to enter the Ancient Hidden Underground Cave, you'll be stopped by Baby Jimmy Hoffa, who is protecting the entrance with a gun. He won't let you in, so take the path to the left and check out the last part of the island, Tiny Tiki.

Down at Tiny Tiki you'll find more babies—many people assumed to be lost forever are really on Easter Island and have been drinking from the Fountain of Youth. Here you'll see a Wipeout! mechanical surfboard riding game, a tiki bar with an assortment of drinks and Baby Glenn Miller surrounded by percussion instruments. After you're done exploring, you'll want to start working on getting into the secret cave. Don't forget to pick up anything that's not nailed down on the island before you start.

Accessing the Fountain of Youth[edit]

You should have a receptacle by now, but you'll soon find that the Fountain of Youth is guarded by three vicious piranha. You'll have to do something to take out the fish, and it will involve help from a variety of the characters you've met on the island and off.

A good place to start is by helping Baby Glenn Miller finish his song. The two elements he still needs are a train whistle sound and a good melody.

With half the requirements for a good song, you'll need to get a good melody. No one on the island seems very helpful, so try going back to your neighborhood to find someone interested in music.

With both elements, Baby Glenn Miller can record his song. For your troubles, he'll give you a conch shell recording which you can listen to at any time.

Get past Baby Jimmy Hoffa[edit]

When you talk to the baby guarding the secret cave entrance, you'll find that he's a bit surly. He doesn't respond well to threats or mockery, so a peace offering might be a better tact.

Now that you're in the proper union, you just have to find something to give him that will get him out of your way. If you tried all the tiki bar beverages, you'd know that he likes them all, so you'll have to find something more potent. If he drinks any more from the Fountain of Youth, he'll probably regress right out of existence, so that's the way to go. Unfortunately, you still have to deal with the angry piranha. This will take some complicated maneuvering, so you'll need to become familiar with the Moai heads and the gongs that are littered around the right side of the island.

With the piranha out of the way, you're free to fill your cup with the Fountain of Youth's waters and give them to Baby Jimmy Hoffa. You can now proceed unimpeded into the secret cave. 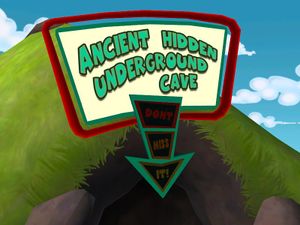 It's pretty easy to find.

Upon entering the cave, you'll be confronted by a group of ocean chimps that are upset at your trespass on the holy land. Their spiritual leader, who you recognize as the spectral ghost of Mr. Spatula your water tank fish, commands your execution. To get out of it, Sam claims that Mr. Spatula is lying and that Max is the true leader. The ocean chimps are willing to give you until sundown to prove the ancient prophecies true by performing three miracles.

Before you get started, you might want to scour the cave for any collectable items.

Sticking down from the roof of the cave are three pairs of large stone feet, presumably belonging to the Moai heads above. When you go to be anointed by the feet, Max will be placed under the middle set and the ocean chimps will wait for a sign from the feet. Make sure the feet give the sign so they know to accept Max as anointed.

When the feet start moving to anoint Max, you're one step closer to gaining control.

You are expected to convert water into a delicious, edible bounty to fulfill the second prophecy. Near the ocean chimps you'll see a ceremonial urn where the conversion is supposed to take place. You'll need to find something to fill the urn and the monkeys' empty stomachs.

Two out of three down, you're one miracle away from making Max the leader.

The last prophecy says that the leader's face will appear in the very rocks of the cave. There's already a graven image of Mr. Spatula, but luckily for you there's also an almost complete Max visage right next to it. If you complete it, you should be able to convince the ocean monkeys.

With all the prophecies completed, the ocean monkeys will see Mr. Spatula for the fraud he is. However, he still thinks he won and tells you that it was him who sent the triangle portal to lure Sam and Max to the island and their deaths. When you finally reach the top of the machine to turn off the lava flow, you're a little bit too late and can only press the emergency button instead. You'll need to go up to the surface to see what happened. Before you go, pick up any new items that might be around.

When you get up above, you'll see that the emergency button summoned a newer, bigger triangular portal, which moves back and forth between the island and the volcano, alternating between sucking things up and spitting them out. One of the first things it sucks up is your portal back home, so you're stuck on the island. The volcano is smoking in the distance and by the curve of its summit you can see it will shoot lava straight across the ocean to Easter Island. You'll have to figure out how to use the emergency protocol to save the island.

You've saved everyone and given the Moai heads another thousand years or so to peacefully keep watch over the island. Since your portal home is gone, you'll have to swim. After the credits roll, a mysterious light shines down on the Moai heads and plucks them up right out of the ground. What could this possibly mean? Find out in the next episode, Night of the Raving Dead.