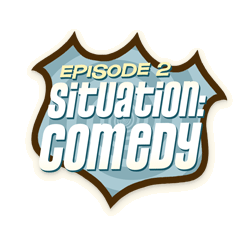 Same & Max Episode 102: Situation: Comedy returns you to the office of Sam & Max as they face off in a handgun duel. Fortunately the phone rings before anyone can get hurt, and the Commissioner informs them that a daytime talk show host, Myra Stump, has taken her entire studio audience hostage. It's up to you to help Sam and Max thwart the hostess' hostage situation.

You'll soon find, however, that in order to gain access to Myra's studio, you'll have come on as a guest star. Myra has strict requirements, so you'll have to have three accomplishments to prove your fame:

Before you get started over to the TV studio, check out Bosco's down the street to the right to see if you can pick up any new merchandise. After seeing his new getup and perhaps hearing about the new menace he's been dealing with, try to grab the last bottle of shaving cream on display by the front door. As soon as you do, you'll find that some belligerent skinbodies snatch right out from under you before peeling away in a diminutive sports car. Run down the street and hop in your DeSoto to follow them.

When you've recovered the shaving cream, get right back into your car and head to the TV studio.

Inside the studio you'll find that your progress is blocked by the director. She's there to audition acting hopefuls to replace the leads in Midtown Cowboys. Since that will get you farther into the studio, ask her if you can audition.

Your wonderful performance won over the director, so you've been cast and can now pass through the blue door behind her.

The show is about two cattle ranchers trying to raise a herd of cattle in an apartment in Manhattan while trying to hide their profession from their anti-bovine landlord Mr. Featherly. Since the cow ate most of the script, you'll need to ad-lib a bit during the shoot, and produce some sight gags for the laugh track. If you mess up at any time, they'll redo the set and you can talk to the director again to try another take until you get it right.

For doing such a great job on the show, the director will hand you a clip for your reel.

You can access the set of the cooking show from the Midtown Cowboys set. All you need to do here is make a cake, and it doesn't matter what ingredients you put in. That's it. On the Wii version, you don't have to put a single ingredient in.

When you walk back out of the sitcom room the way you came in, you'll find that the empty studio has been converted into the set of a singing talent show. They're short on judges, so Max will be filling in for Peepers' old spot, since he's going to be a contestant instead. In order to win the competition, you'll need a unanimous decision from the judges, but in order to do so you'll need to change the other two Soda Poppers' minds. You'll need some additional help, so grab the inventory item on the set and head back through the sitcom room to the game show room.

Who's Never Going to be a Millionaire?[edit]

When you walk into the game show room for the first time, you'll go into an automatic conversation with Hugh Bliss, the magician turned motivational speaker.

Once you're done talking with Hugh, you'll be able to go on the game show. Walk up to the podium on the left (the one with the score of zero on it) to start the game. After failing to answer the impossible question, you'll realize you're going to need some help to improve your odds.

Since they don't have a million dollars in cash, you'll have to settle for food stamps.

Become a scandal and get a recording contract[edit]

For the next part, you'll need to head back to the office so you can talk to your friends on your street.

Now that you have proof of your celebrity scandal, you can work on winning Embarrassing Idol.

The recording contract should be the last element you need to prove your celebrity status to Myra and be guest on her show. Head over to the game show room and knock on the pink door to talk to her.

You'll first need to talk with Myra at the door and convince her to let you in by showing her the three forms of evidence of your fame. When you're on the talk show, you'll need to abide by Myra's rules, which means staying where you're seated and not interrupting her. As you walk on the set, you'll see suspicious teddy bear on the desk, which Sam immediately spots as the hypnotic device controlling Myra. Somehow you'll need to disable that bear to break its spell on Myra.

You've solved another case, however there may be some link between this one and the Culture Shock, since they both involve hypnosis. As the episode comes to a close, you'll note that the gift box containing the hypno-bear was sent from The Toy Mafia.