Sam & Max Save the World/Episode 104: Abe Lincoln Must Die! 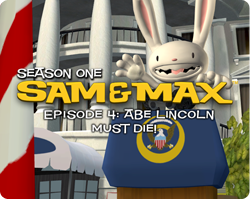 In Sam & Max Episode 104: Abe Lincoln Must Die!, Sam and Max are told that the President has begun acting strangely. Federally mandated group hugs, a pudding embargo, and other crazy schemes are afoot. It's up to Sam and Max to uncover the nefarious plot and return the President's sanity.

This walkthrough covers only those tasks necessary for completing the game, and ignores interactions and dialogue choices that only provide humor and subtle clues.

The game opens at Sam & Max's office but quickly moves to the White House. First, head downwards and pick up the boxing glove. This goes into your inventory (the cardboard box) which already contains the big gun and organic listening device. Now head over to the White House itself. You can try talking to the security guard, Agent Superball, but nothing you say will convince him to let you in. Investigate the payphone to learn the phone number. That's all the damage you can do here at the moment, so click on the car and choose to go back to the office. 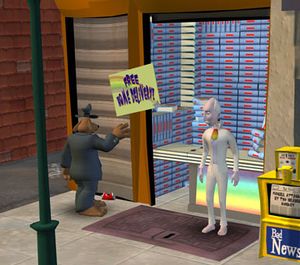 Remember, stealing isn't stealing if you don't get caught.

Head to the left and click on the tank posters. Pick up the one that falls on ground; this is needed much later, and it's easier to get it now rather than have to backtrack. Head back to the left to exit the side street, then head to the right just past the office. Talk to Hugh Bliss and ask him to do a magic trick. While he's gone, grab the "free home delivery" sign. If you aren't fast enough he will prevent you from taking it, so ask him to do another magic trick to repeat the process. You now have both of the signs needed later in the game.

Head back to the left and enter the office. Use the phone and call the White House. Agent Superball will answer. Ask him to hold the line. Now head back outside and return to the White House. When you get there, Agent Superball is still holding the line. You can now enter the White House. You can poke around here for a while. When you're ready to proceed, click on the door to the war room. Sam and Max will be thrown out, and Governor Whizzer will arrive. Head back inside the White House. The President will assume Sam and Max are the interpreters he was waiting for. Talk to him and say you're ready to interpret. To proceed, translate the first statement as a request for a drink. After this Whizzer asks where the bathroom is. All of the options will result in funny outcomes; to proceed, ask for directions to the war room. Now use the boxing glove on the President. After a complicated series of events an emergency election is announced, and Sam decides that Max will have to run for presidency against none other than Abraham Lincoln. 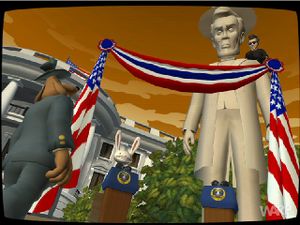 Once outside, head back to the office. Use the organic listening device on the phone. Say "I, Abraham Lincoln, am that man", "This is a date that will be remembered for centuries", "I stand here at the steps of the White House", and "The time to act is now". The scene will now change to the White House, where Abe's rousing speech about the importance of honesty and family values is interrupted by Sybil asking about his date with her. Go back to Sybil's and ask about carbon dating. Head back to the White House and go inside. Click on the national budget and check Sybil Pandemik's Office. Head back to Sybil's and take the carbon-dating device. Head back outside and go to the far right. Go into Bosco's Inconvenience Store. Use the carbon-dating device on the hot weenies. Go back to the White House and tick Bosco's Inconvenience Store, then head back there and talk to Bosco to get his truth serum, which is actually a bottle of vodka. 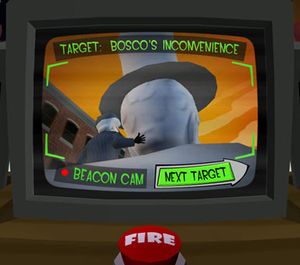 Head back to the White House and give the truth serum to Whizzer, which leads to the others declaring war. Take the ribbon from the desk. Look at the calendar and move the sticky note to April 26, Secretary's Day. Use the ribbon on Agent Superball and choose whichever honorary position you prefer (if you want to try the other options simply take the ribbon off him and repeat). When you're ready to proceed, tell him to take a vacation. At long last you can enter the war room. After an interesting cutscene, head to the far right and look at the targeting computer until you reach a screen showing Bosco's store (you can fire on the available locations if you wish, but this is optional). Return to Bosco's and click on the camera just to the right of the door to find the beacon. Jump in the car and choose to go after Lincoln. In this mode you can control the car's position on the road by clicking. You can use a variety of items here, but the only one that does any good is the beacon. Once it's successfully attached, head back to the war room and launch the missile. Congratulations, you've foiled another nefarious scheme!