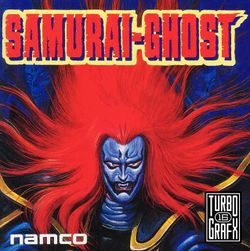 Samurai Ghost (sometimes typeset as "Samurai-Ghost"), released in Japan as Genpei Touma Den: Kan no Ni (源平討魔伝 巻ノ弐, lit. "The story of exterminating demons during the Genpei period: Volume 2"?), is a 1992 action game released by Namco for the TurboGrafx-16. The game is the direct sequel to Genpei Touma Den, though the third game in the series, and is the first game in the series to be released outside Japan. It was re-released on the Wii's Virtual Console in North America on October 29, 2007 and in Europe on November 2, 2007.