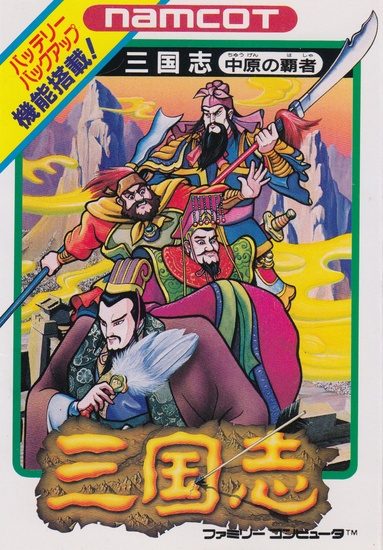 三国志 中原の覇者 (Sangokushi - Chuugen no Hasha, 三国志 中原の覇者?) lit. "Three Kingdoms: Champion of the Center" is a strategy game developed by Namco for the Famicom and published in 1988. "Nam cot family computer game series" 42 bullets. It was followed by one sequel on the Famicom, San Goku Shi II: Haou no Tairiku in 1992, and by another sequel, released for the PlayStation Portable in 2006, entitled Chuugen no Hasha: Sangoku Shouseiden

This game, taking place in the late period of the Three Kingdoms rule over China, is a historical simulation with the goal of being the Chinese monarch who unifies China while maintaining a grip over their existing kingdom. Successful strategies must be accomplished through a limited number of available commands, such as instructing battle units who organize semi-automatically.

At the start of the game, you must answer a number of questions as part of a "hero type personality diagnosis." Upon completing the questions, you will be assigned one of six different rulers, each with different statistics. However, the number of questions is small, and it doesn't take a lot of trial and error to determine how to get the monarch you want.

Four icons are displayed on the bottom of the screen, from which it is possible to issue commands. Players execute one instruction per region, and saving the game is considered one of those instructions. The number of the instructions a player can execute is determined by the number of countries under their control, and by the level you choose at the start of the game.

State of the castle
It is possible to check the status of you castle-countries. You can freely see your own castle, but in the case of an opponent's castle, you must use up one of your instruction commands.
Movement of military commander
It is possible to move the military commander of the castle between countries that are linked by roads. However, you must keep at least one warlord in any of your castles.
Information collected
It is possible to order a military commander to gather information, and to look for a new military commander. Some may find the treasure and gold as well as other warlords. A commander's intelligence can affect the outcome. Monarchs can not go to gather information, nor can two commanders from one country.
Nation-building
There are three types of commands that can be executed; Increase the value of the land, development of industry, and development of the town. Gold is needed to perform most of those commands, and intelligence will affect the outcome.
Path searching
It is possible to see the road connecting two castles together. When you attempt to launch a war you can only move to the castle which is connected by roads. This does not use up your turn's instruction.
Record
Save the current state of the game to backup data.

Give
It is possible to give money to people and military commanders. The permitted range is 1-99. This increases the commanders loyalty, and the degree of governance of the people. If you have a weapon, you can grant it to a military commander to increase the military.
Carry
Use to transport the goods from one castle to another as long as they are linked by roads.
Offer gift
It is possible to create a friendly relationship when you send a treasure to a castle under an opponent's power. You can see the effect of the reaction after sending, although you may get attacked even if your friendship level is high.

Reconnaissance
Examine the terrain map in the vicinity of you castle for enemies. Castles within your own country can be viewed freely, but one instruction use is required per castle in regions of other countries.
Conscription
Organize and sign up members of the military. One instruction use is required when organizing. 20 gold is required for every 100 men. The maximum number of soldiers per one military commander is 1,000. But you can also place soldiers in castle above and beyond the military commander's limit.
Departure for the front
Wage a war against an enemy's castle. 20 gold is needed per 100 soldiers.

There are four types of facilities of the city, although not every type of facility will be available at in every town, or at the start of the game.